Whodat at Doodad does musak 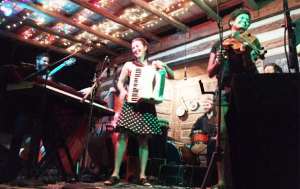 All manner of Greensboro folks and those from surrounding areas gathered Saturday, Aug. 15, for the Whodat Festival at the Driver family’s Doodad farm to enjoy local music and buy local wares.

Musicians, artists, students, hippies, young families, vendors and other varieties of Triad people gathered to listen to everything from punk tunes to folksy grooves.

Attendants were welcome to camp for the night at the farm, ensuring minimal drunk driving and maximum enjoyment.

For a local festival that has only been around for four years, Whodat has grown in size every year, and according to Rachel Rossabi, this year’s M.C., that is all due to astute planning and marketing.

“We’ve had a couple more hundred people this year…we got a really good response, I guess, you know, from social media marketing this year. Doodad farm has gained a lot of notoriety over the years,” she said.

Rossabi was introduced to the festival at a grassroots level after returning from studying abroad by friends who were already volunteering for Whodat. She commented that three of the volunteers were UNC-Greensboro alumni, and the rest of the volunteers attended college somewhere in North Carolina.

In the trend of keeping Whodat community-oriented, the festival now also partners with local businesses like the Cords, the Idiot Box, Center for Visual Arts and Triad City Beat to get the word out.

Whodat relies largely on donations to keep going and to pay the bands (they make no profit), but food vendors help draw in spending attendees.

One vendor, Jared Mankoff, sells Kava tea at Whodat, though he started by just giving it away a couple years ago.

“When I first came here, I set at this same spot…and let the staff and volunteers drink for free, and if someone wants to buy it, they can let me know, but I let people try it,” he said.

While Jared was more informal with how he distributed his goods, some of the other vendors were the standard, slightly overpriced food trucks to be found at any festival.

At Whodat, one could buy a six-dollar basket of naan bread with chili sauce, which would probably be given away at any Indian restaurant as a tide-over snack before the entrée, but such is the struggle of enjoying energetic and diverse local music.

A stalwart Whodat-goer commented on his experiences over the years, explaining that the atmosphere of the festival is what keeps him coming back again over the years.

“The family that owns this farm is really dedicated to music,” he said.

As far as the actual music goes, Crystal Bright and the Silver Hands were mesmerizing. The lead of the band sang, played accordion, keyboard and drums with a charisma that got everyone dancing.

The M.C. of the night said she preferred the Midatlantic, who played right before Crystal Bright.

She commented on a few of the other bands, describing why she was hyped to hear the bands, The Tan and Sober Gentlemen, remarking that The Chit Nasty Band has played at Whodat every year it has been held. The latter band closed out the festival with their 1:00 a.m. set.

As far as the future of the Whodat festival is concerned, Rossabi said she does not think it lies in aspiring to a major music festival like Bonnaroo, Firefly or Coachella. Instead, she believes Whodat’s strength is in its ability to draw local artists and enthusiasts for one night of community.