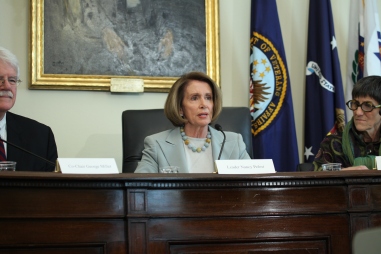 It is evident that the people of America are in search of a change from the kinds of politics that we have been seeing for decades now. Phrases like “political revolution” have become standard when discussing the ideal government, and our deviation from electoral norms became evident with the popularity of both Donald Trump and Bernie Sanders during the 2017 election.

The people of America want reform, and we want to tar and feather every corrupt politician and throw them into the Potomac. Perhaps that’s just me. Our politicians seem ineffective, and we are seeking new leadership to change the norms. And while change is not always beneficial (i.e. Donald J. Trump), sometimes it can be exactly what the world needs. And for this reason, it’s time for Nancy Pelosi to step down.

To be an effective leader, one must be both feared and revered by those whom one is attempting to lead. But when the people who you are attempting to advocate for are screaming “Please God, do not continue trying to advocate for us,” you are no longer an effective leader. For Nancy Pelosi’s opposers on the right, she is a knee-jerk liberal who dabbles in baby killing and orchestrates pride parades in her free time. For the left, she is the reigning queen of corruption and the number one enemy of Karl Marx, as well as freedom. The center remains impartial.

It is important to note that Nancy Pelosi has done a lot of good for the Democratic party, like helping to establish Obamacare, and being a driving force in the legalization of gay marriage. She has remained mostly consistent on the issues she votes on, and has been outspoken against a number of issues which violated human rights. However, there is no reason for her to continue holding onto her position for 20 entire years, especially when holding that position has deprived the nation of the change that could have possibly come from candidates such as John Boehner or Tim Rice.

The result is angry voters, and outcries for change. After many disappointing losses for the Democratic party, it became apparent that Pelosi was not quite the candidate that many of her voters believed she was. The distaste for Pelosi became especially apparent when a Republican campaign linked her to other Democratic candidates led to a loss in popularity for those candidates. She became the King Midas of a nation, but rather than turning everything to gold, she turned every candidate’s image into that of corruption.

Being unpopular has never stopped a political candidate before; in fact it is often the fire that burns in their belly, fueled by the undying hatred of the nation. It is not simply that Pelosi is an unpopular politician, but that she has become an ineffective one. She cannot seem to win any of the fights she has attempted to begin for DREAMers, even turning them against her. As Minority Leader of the House, she lost 63 House seats to the Republican party during the 2010 election.
Pelosi’s image is currently one of the worst in politics. Her name often conjures up images of red horns and the theme of “Ave Satani” as made popular by The Omen. She is despised by voters of all parties, with her fans becoming fewer with every speech she gives. She gives the Democratic party a bad name, as well as politics in general. She is not the leader whom the people want, nor is she the leader we need. Her claim to fame will be that she will forever be taught in PR classes on how not to lead a political career. It’s time for her to step down and allow for someone else – anyone else – to take over. While experience is nice, it’s time to end corruption and to reignite a political revolution.

Like Loading...
‹ Don’t Believe the Glitter of the ‘80s
Elon Musk is a Businessman, Not a Scientist ›