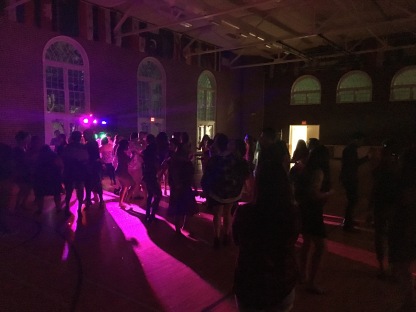 This year, UNCG is celebrating Hispanic-Latinx Heritage month with an array of events from discussions on the meaning of words like Hispanic, Latino and Spanish to cultural experiences of Hispanic and Latino culture. One event in particular was promoted by UNCG’s SALSA (Spanish American Latino Student Association), who encouraged students to attend “Latin Night:” held at Salem College in Bryant Hall on Thursday.

The “Latin Night” was sponsored by Salem College’s HOLA (Helping Organize Latino Americans) club who modeled this night after a Latin dance club. Students danced to the rhythms of Latin music as some students served as impromptu dance instructors for those just learning the moves. The event featured DJ Dan from Artistika, a Latin and intercultural dance club in Downtown Greensboro.

On Salem College’s website, HOLA describes their mission: “to celebrate with and educate the Salem community about Hispanic culture while also providing support group for Latina Salem students…to sponsor meaningful activities and service projects to benefit Salem College and the Hispanic community of the Winston Salem area.” It should be noted that the support group is specifically dedicated to Latina students, as Salem is an all-women’s college.

HOLA’s event and meaningful mission appeared a success as students from a variety of schools filled the dance floor of Bryant Hall for the entire evening, embracing either a familiar or new cultural experience. The room was a large, open space and dark apart from the multicolored lights set up around the room.

Tables were situated around the outside of the dance floor for students to relax and socialize, or perhaps just recuperate before heading back out to enjoy the fun. Positioned at the head of all of the dancing was the DJ booth and speakers blasting Latin beats. A Chapel Hill student attending the dance with their friend and UNCG student, Allen Sullivan, described the event as having “a really cool vibe that [he doesn’t] usually experience” as he is always “down for anything involving dancing.”

Latin dancing is defined by britannica.com as “dance traditions of Mexico, Central America, and the portions of South America and the Caribbean colonized by the Spanish and the Portuguese.” According to ballroomguide.com, the five major Latin dances include the Samba, the Cha Cha, the Rumba, the Paso Doble and the Jive. The website notes that the dances differ in specific technique but are consistent in their energetic expressiveness and passionate style.

Each of these Latin dances are performed with a sense of excitement and intensity, often meant as a celebration of life. However, as mentioned above, each of the dances have their own unique characteristics. For instance, the Rumba is meant as an expression of love and sensuality while bullfighting inspired the Paso Doble. The Samba is rooted in the feeling of “partying all night long,” similar to the Jive, which is also centered around having a good time, only it is accompanied with a different style of music. Finally, the Cha Cha, meant to be a “cheeky, teasing, flirty and playful” dance, is represented by a mix of “fun and sophistication.”

While Salem College’s “Latin Night” did not have designated instructions for the various dances mentioned above, many attendees either quickly grasped the style or were already accustomed to Latin dancing. No one was left on the outskirts of the dance floor for long, as students welcomed and encouraged everyone to get out and have fun all while developing a new appreciation for an important aspect of Latino culture.

If any students from UNCG are interested in learning more about or attending future events related to celebrating Hispanic-Latinx Heritage month, they can visit the Office of Intercultural Engagement’s page on UNCG’s website for a calendar listing of all events. On Oct. 12, there will be an “Outdoor Fiesta” located outside the Moran Commons on UNCG’s campus.