Review: ‘Raisin in the Sun’ Opening at Triad Stage 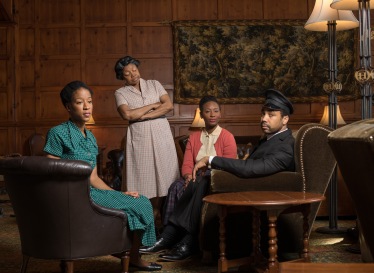 Friday saw the opening of “A Raisin in the Sun,” a classic American play by Lorraine Hansberry at Triad Stage in downtown Greensboro. This play explores the racial tension present in the 1950s and the challenges of achieving the American dream. However, this play is nowhere near foreign to today’s social and economical climate. The characters, which consist of a family in Southside Chicago, are anxiously awaiting an insurance check that could change their life, by providing new opportunities for each of them.

“I love Hansberry’s play and consider it to be one of the single finest plays of the 20th century,” said Triad Stage Founding Artistic Director, Preston Lane. “It is so much of its time but also timeless in its fierce and passionate examination of family and the corrosive power of bias and money. Hansberry was not only a remarkable story teller but a social critic who is not afraid to stand up to the status quo.”

This production was directed by guest director Tiffany Nicole Greene, a young director working to approach this production with “a vibrant living story with much to discover.” Greene seeks to bring new life to these classic characters and show it to us as if for the for time, and sought to do this with the fresh and vibrant cast she put together. The cast, featuring three students from UNCG’s theatre program, presented characters who face a lot of the struggles that people face today.

This impoverished family is on the edge of financial downfall and the mother of the family, Lena, wants to use the insurance check to buy a new house, the sister, Beneatha, wants to use it for medical school, and the brother, Walter Lee, wants to buy a liquor store. All are at odds with each other about who deserves to use the money for what, but at the end of the day, the check is assigned to the mother and so it is up to her to decide. Lena cares deeply for her children and wants to ensure their happiness, but she challenges the idea of where happiness comes from. The mother argues that happiness is in those that you love, while the children argue that happiness comes with success. This long time argument can still relate to audiences today as many people face the same financial conundrum.

The creative team at Triad Stage has put together a beautiful play about what really makes a lasting impression in our lives. While the characters of this play are greedy and selfish, by the end, they achieve redemption through the love they share for their family and the pride they have in being African American. In the end, they move to a new house in an all-white neighborhood against the wishes of the neighborhood “welcoming committee” who offers them money to not move in.

Come out to see a show that is perfect for Black History Month, with a cast mostly consisting of strong black actors. This play will be running through Feb. 18 at the Triad Stage theatre in downtown Greensboro.

Another American classic play, “Our Town” by Thorton Wilder, will be opening in the Triad Stage theatre in Winston-Salem on Feb. 14 and runs until March 4. The dates and times and Pay-What-You-Can nights for these can be found at the Triad Stage website, triadstage.org. There are also student rush tickets for $10 at each performance for college students.

If you are lucky enough to see Raisin in the Sun, do not miss out on the spin-off play “Clybourne Park” at UNCG, starting April 18.