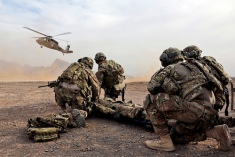 America is a country that loves privatization. This happens in prisons, police, intelligence agencies and even our pride and joy-the military. Private military firms are businesses that provide military and security services for their employers. In 2016, 75 percent of American forces were private contractors. In 2017, Erik Prince, former head of Blackwater, and Stephen Feinberg, head of Dyncorp, discussed plans for contractors completely taking over U.S. operations in Afghanistan. Although ultimately unsuccessful, it remains to be seen if the current administration will change its mind.

Contractors are involved in almost every military task, such as intelligence analysis, logistics and training allied soldiers. Contractors are even involved in U.S. special ops missions. This is because contractors are essentially untraceable and unaccountable. Most are born in other countries; only 33 percent are registered U.S. citizens.

Private military firms don’t have to report their actions to Congress, unlike the military or intelligence agencies. They also aren’t subject to the Freedom of Information Act, so private citizens and journalists aren’t allowed to access their internal documents. There are also no international laws to regulate private military firms.

A 2010 investigation by the Senate found that many subcontractors were linked to murders, kidnappings, bribery and anti-coalition activities. Some subcontractors even formed their own unlicensed mercenary groups after coalition forces leave. A 2010 House investigation showed evidence that the Department of Defense had hired local warlords for security services. In 2007, Blackwater contractors massacred 17 civilians. This eventually led Blackwater to being restructured and renamed as Academi.

You’re probably asking yourself why we even hire these guys. The answers are pretty simple.

One reason is that the U.S. has major problems meeting their recruitment goals. Military brass had two options: institute the draft, or hire contractors. They chose the latter option. Contractors also don’t count as troops, so they can circumvent government imposed troop-caps. The government can hire as many contractors as they want. It’s very likely they do, as the Pentagon spent $285 billion on federal contracts in the 2014 fiscal year.

It was later determined that 45 percent of these contracts were for services, mostly those of private military contractors. Because of this, private military firms turn a huge profit. According to author Paul R. Verkuil, the private military industry made over $100 billion in annual profits in 2007. That number has likely increased in the following years.

In conclusion, I think the private military industry is dangerous to taxpayers, foreign civilians, and the contractors themselves. They are a highly trained, highly effective, unregulated and untraceable army who will work for the highest bidder. They are allowed to go anywhere, work for anyone and do anything without government supervision or regulation. The U.S. has essentially outsourced their war crimes to any company that is willing to take the contract. These contractors are then exposed to conditions that contribute to their higher casualty rates.

I also find it quite telling that the DOD hired warlords and neither them nor the warlords they hired were prosecuted. The Blackwater operators that massacred 17 civilians were never held accountable.

Gone are the days of government armies. Soldiers of the future will pledge allegiance to their corporate overlords. But don’t take my word for it, listen to a former contractor. Sean McFate worked for DynCorp before he retired and became a writer. In his chilling 2015 interview with The Atlantic, he said, “They can go and commit human rights violations, frankly. This is a common attraction about hiring private military companies or mercenaries—that they can get away with things that you can’t get away with if you’re a national government.”