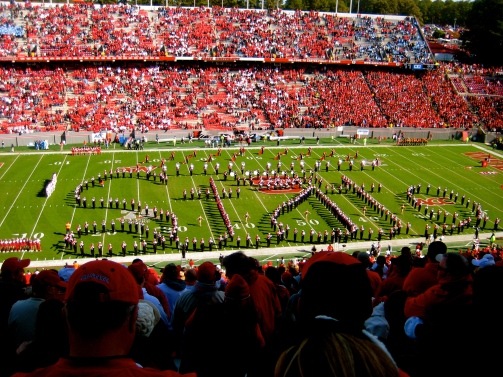 NC State’s College Football Playoff aspirations were completely extinguished in the past few weeks, thanks to a 41-7 whooping at the hands of the Clemson Tigers, followed by a crushing 41-31 defeat to the Syracuse Orange. However, a New Year’s Six bowl is still very much within reach of the Wolfpack if they manage to win out, and that potentially started with a 47-28 victory over the struggling Florida State Seminoles back home at Carter-Finley Stadium.

The Pack jumped out to a 17-0 lead and did not look back. Ryan Finley, one of the most efficient quarterbacks in the country, had another solid performance, completing 21 of 27 passes for 240 yards and a pair of touchdowns.

Reggie Gallaspy added 106 yards on the ground and Ricky Person finished with two rushing scores. It was a much-needed win for the Pack, who entered the game on a two-game skid. With an easy slate of games ahead, NC State will aim to finish at 10-2 and pray for a berth in a coveted New Year’s Six bowl.

NC State’s bitter rival, North Carolina, has not fared nearly as well this season. Between a host of their players facing suspensions early in the season, to devastating injuries at quarterback, they have limped through the 2018 campaign with a miserable 1-7 record. Many in Chapel Hill are calling for Head Coach Larry Fedora’s head—and, if the university is willing to cough up the money for Fedora’s contract buyout, they very well may get it.

On Saturday, they again fell to Georgia Tech, 38-28. The Yellowjackets, running their characteristic triple-option pounded their way to a 28-10 lead early in the third quarter. Though the Tar Heels eventually tied it up at 28 early in the fourth, a Tobias Oliver touchdown run and a short Wesley Wells field goal sealed the game for Georgia Tech. The Yellowjackets rushed for 461 yards on 72 attempts.

Wake Forest fared little better on Saturday. Coming into their matchup against Syracuse at 4-4, it was crucial that they earned this victory to ensure an easier route to bowl eligibility. That, however, did not pan out for the Demon Deacons, who fell to the Orange by a score of 41-24. Turnovers doomed the Demon Deacons that afternoon, coughing up the ball three times to Syracuse’s zero.

Though Wake earned an early 10-0 lead, the Orange scored 28 unanswered and ran away with the game. Syracuse quarterback Eric Dungey threw for 157 yards, rushed for another 119, and found the endzone on the ground once. The Demon Deacons simply had no answers for the Orange’s dual-threat star.

App State quarterback Jacob Huesman threw two interceptions, but the Mountaineers held Coastal to a mere 178 of total offense. Appalachian State found a way to score just enough and left Conway with a victory and an opportunity to capture the lead in the Sun Belt East with a meeting against first-place Troy in the last game of the season.