Home › Sports › Getting to know our student athletes: Lucy Mason

Getting to know our student athletes: Lucy Mason 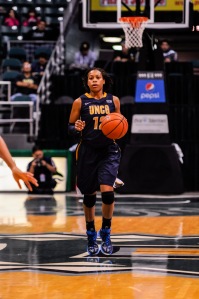 With the success of Spartan Madness two weeks ago, and basketball season right around the corner (the women’s first game is on Thursday, the men’s next Saturday); this week the Carolinian had the pleasure of sitting down with UNCG women’s basketball star, Lucy Mason.

Mason, a senior guard who hails from Stone Mountain, Georgia, has served as an influential asset for the Lady Spartans in her four years.

Mason hails from an extremely athletic family, and began playing competitive basketball at the age of six.  “Sports were always around, and when I would visit my grandmother in Kentucky she had a basketball goal on a clothesline, so we would play on that and that’s how I pretty much got started playing basketball,” recalls Mason as she tapped into her earliest memories of learning the game.

During her high school career, Mason served as a three-sport standout who was an all-county performer in basketball and softball in addition to turning in a top-10 finish in the 100-meter hurdles at the state track meet for Chamblee (Ga.) Charter High School. She helped the Bulldogs to region runner-up finishes in 2009-10 and 2011-12 and an undefeated regular season and No. 1 state ranking in 2010-11. She was named the Atlanta Journal-Constitution’s AAAA Girls Basketball Player of the Year as a senior. Mason also earned all-region honors in softball and started for the North squad in the DeKalb County All-Star game. Mason was an Honor Roll and National Honor Society student Played club basketball for the Atlanta Celtics.

Transitioning out of high school and into college, Mason had a major decision as to what sport she would choose to pursue at a collegiate level. “I always knew I wanted to play basketball at a collegiate level” said Mason. “For me though, it was a competition to see if I could get scholarship offers in every sport that I played.”

During her freshman season with UNCG Mason Played and started in all of UNCG’s 31 contests during the season. She was tabbed the Southern Conference Freshman of the Year by the league’s media members and was selected to the SoCon All-Freshman Team by the head coaches after pacing the Spartans with 12.5 points per game to go along with 64 assists and 48 steals. Mason also finished 13 overall in the league in scoring average while also ranking in the top 15 in steals.

During her sophomore season, Mason played and started all of the Spartans’ 30 games. Mason became one of 10 players to average double figures in minutes played and also led UNCG in scoring (398 points) and scoring average (13.3 points per game).

During her junior season last year, Mason played in all 30 games, starting every game at guard and was named to the SoCon All-Conference second team. Mason had four-straight 20 point games before scoring 15 in the SoCon Tournament against Chattanooga (March 5)  her 460 total points is a new single-season high and was awarded a SoCon Commissioner’s Medal (3.5 GPA or higher)  she also made the SoCon honor roll.

As the best player on the Women’s basketball team these past three seasons, Mason has spent much time developing her game. However, because of the time necessary to improve her game with school, it may seem tough for Mason to maintain both equally. However, when asked the secret to maintaining her academic success, Mason shared her strategy for keeping up her grades. “I wouldn’t necessarily call it a secret, it’s more so of time management, or being able to meet with my professors when I’m unable to make class.”

As a junior, Mason was named to the All-Southern Conference second team selected by the league’s media members, picking up her second All-Conference accolade after being named the 2013 SoCon Freshman of the Year and made the All-Freshman team during the 2012-13 season.

With her senior season approaching, Mason is hopeful that once she graduates, she will at least have the option of playing basketball professionally. “I think now that senior year is approaching and I can see the end of my collegiate career, it’s something that has definitely been on my mind, but given the opportunity to play basketball professionally is just one of those things that you can’t pass up if given the opportunity.”

With the 2015-2016 basketball season right around the corner, fans and students alike are excited to see what this young lady has in store for the lady Spartans.