Wave of protests hit campus: UNCG students stand up and speak out

Monday at noon, students gathered on the EUC lawn to rally for solidarity with Mizzou.

The rally attendees spoke about what happened at the University of Missouri where the students protested against, what they argue are, acts of racism, which led to a student’s hunger strike and a threatened boycott by the football team.

UNCG students stated that they were pleased to see that the University of Missouri System President Tim Wolfe resigned and that Chancellor R. Bowen Loftin would be stepping down at the end of the year.

“The rally came together after the impetus from the courageous students at Mizzou who, both, went on strike and fought in solidarity to get Tim Wolfe to resign,” said Dhruv Pathak, senior and organizer of the rally.

The rally organizers had a list of demands they asked the administration to acknowledge. Gilliam addressed several of those demands.

The renaming of Aycock Auditorium was the first demand. Students said that the university should not honor the building’s namesake, Gov. Charles Aycock, who was involved in the state’s white supremacy movement.

Amidst the frustrated voices of students, Gilliam agreed that this is something that requires discussion and said the answer would be made public after the board’s decision.”The Board will review it and have an answer in February. It’s a public forum,” he said.

Some were unhappy with the comment, and one student pointed out that three other North Carolina universities had already taken names of white supremacists off of campus buildings. 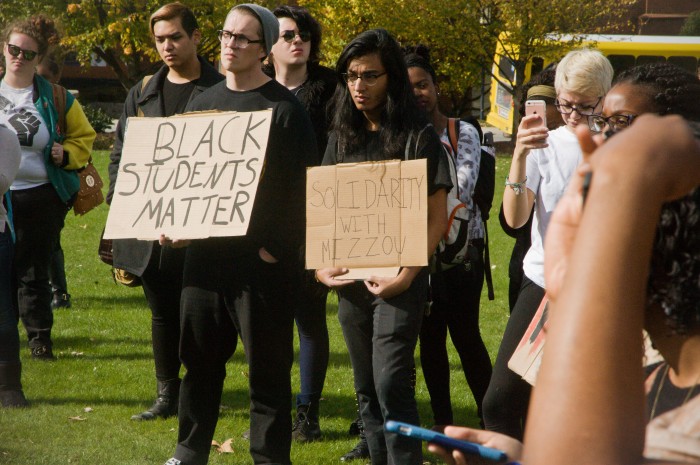 As tension in the U.S. has augmented between the public and police, students argued that police at UNCG have begun to overcrowd and are participating in racial profiling.

“I understand. I was handcuffed twice in my own driveway before I moved here, so trust me, I get it,” Gilliam said.

Gilliam told the students he understood these concerns and that he had lived through the situations they were describing. However, he also stated that the safety of the students on this campus was important, noting that the number of sexual violence cases the university has witnessed this semester was “alarming.”

Gilliam also suggested that the combination of alcohol and drug use was a major cause for the increase in sexual assaults on campus.

Included in the list of demands, the students suggested a Mandatory Inclusive Consent Training for all incoming freshman and transfer students as well as on-going consent training for Fraternity/Sorority houses and all campus dorm residents.

Following the resignation of Missouri’s Tim Wolfe, students also are asking UNCG to call for the removal of UNC system President-Elect Margaret Spellings after the controversial election and her history of discriminatory statements regarding marginalized communities, specifically the LGBTQ community.

Students from two academic departments, African American and African Diaspora Studies and Women and Gender Studies, spoke against the recent budget cuts. They pressed for introductory classes in these fields to become required courses and they also demanded an increase in the number of minority faculty members.

During the rally, students were concerned about the dissolution of the African American and African Diaspora Studies and the Women and Gender Studies Departments due to inadequate funding.

Ali, who was the rally’s facilitator, said misinformation about the issue has somehow been disseminated and the departments would, in fact, be staying. Ali argued that the “infusion” of curriculum from these departments with American history courses on campus would allow for more understanding and open-mindedness.

He believes that UNCG is the most diverse institution out of the UNC system and that there needs to be a continuing support to cultivate this diversity.

Students also brought up concerns about lacking funding to university centers such as the Writing Center, which will be closing nearly two weeks earlier than in previous years.

Students also demanded that UNCG be accountable to the larger community by stopping the gentrification of Glenwood. They believe that UNCG should stop further plans to expand campus into the neighborhood and should work with the community to decide what to do with the property already purchased by the university.

“We’re asking for things that can be done by the administration and hope to get a response by this Friday,” said Dhruv Pathak, who helped organized the rally.

Pathak, who is also a student organizer with United Students Against Sweatshops, states that students are in the process of forming a coalition of student groups and community members in order to campaign for the list of demands presented at the rally. Pathak said he believes white supremacy, and all its manifestations, needs to be addressed.

The hour-long rally ended as students sent messages to the university through chants: “We tell the whole wide world, this is student’s territory.”