Yes, UNCG does have a football team! 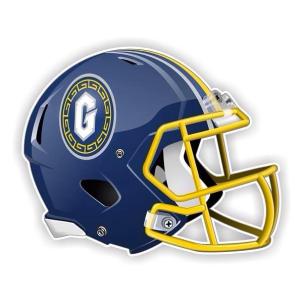 Most people probably think that UNC-Greensboro lacks a football team. The university has never officially had a football team in its 125 year history, despite a sweatshirt saying we have been undefeated in the sport.

However, the Spartans do have a club football team. And for any speculation about the lack of talent on the team, that is not the case at all for this squad. This football team is full of players that have plenty of football talent and experience.

“I have been playing football competitively since middle school,” senior defensive tackle and right guard AJ Kerrington said. “I played throughout high school and had a chance to play at my previous college but did not take advantage of it. When I got to UNCG, I realized how badly I wanted to play football.”

UNCG’s club football team is not just random students who throw the football around for fun. These players are legit and serious about representing the blue and gold.

This football team has players who love the game of football and enjoy playing and competing against each other. Some of the players love the contact or use it as a means of anger management. They are serious about football, though. It does not matter if others try to classify it as a club sport.

These players have goals in place for their individual selves and the team as whole. They practice during the winter and spring to prepare for their upcoming season. Despite the fact that the season for this club football team is not until the fall semester, there is absolutely no time to be taken off for this squad. Goals have been set for the fall and they will not stop until their goals have been met. These players are ready to give everything that they have for their coaches and teammates.

“We want to go all the way,” senior defensive end and center DeSean Mason said. “We want to win eight games and play for the state championship in Salem, Virginia in the fall.”

It is obvious that this team is focused and driven. These players are looking forward to getting back on the field in the fall while looking ahead to the future of the team. An NCAA Division I program at this university is something the team hopes to see in the future. Also, they just want the football players running out on the field with a Spartan leading them out while riding a horse. There would definitely be school spirit up at UNCG if this were the case. That would definitely have a different vibe for the athletic program at UNCG.

“I just wanna be recognized by the athletic program,” senior linebacker Quan Pratt said. “We deserve the same benefits as the others athletes here.”

Despite the lack of recognition, one thing is for sure: these players are constantly working to get better at their loved sport. With the help and discipline of coaches who are pushing these players to their max, the team is looking more like a team every day. Senior tackle Darryl Fleming sums up the club football team at UNCG very well.

“We are here,” Fleming said. “We are real and ready to go. People need to come out and support us in the fall.”

The team practices on Sunday at 8:00 p.m. and Monday and Wednesday at 7:00 p.m. on the North Field of UNCG if you are interested in joining or cheering on your Spartans.