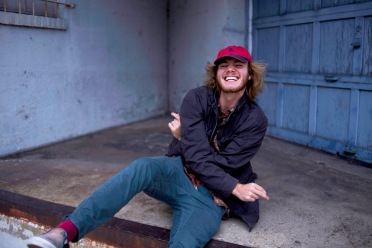 “A ‘seer’ is someone, by definition, who has an intuition of the future, and I can’t see the future,” Seers continued. “But I believe that I can control it. By envisioning it, I can make it happen. So I imagine the future and try to bring the changes I envision in the world.”

Going by an alias, Seers is an undergraduate student studying communications at UNCG.

“I’ve always loved singing and words a lot,” Seers said. “I’ve always tried to listen to all kinds of music and my older siblings helped me with that. They were always listening to music and that shaped my taste and passion for it.”

Seers is a musician who describes his music as hippie, underground and experimental.

“I like to experiment a ton and breed genres,” he said. “I like to get different voices in my music, even if I have to edit my own to make it obscure. [I] just try to push the envelope while also giving people what I think they want and making music for myself as an outlet.”

He finds inspiration from other musicians such as Jack White, Kayne West, Isaiah Rashad and many of his friends that he performs with as such like The Reaper, Tange Lomax and Denzel Curry.

Even though he has been performing publicly for about four years, in the last year and half he has been playing more gigs and shows than ever before.

“When performing, I like being able evoke feelings and images,” he said. “And get people to think about things differently and broaden their perspectives.”

The main thing he loves about performing and making music is letting people know that there are other people like them out there as well as the complete opposite – that they are unique but they can still entertain the thoughts of others at the same time.

Seers writes his own lyrics and takes away from life changes, understanding and putting himself in other people’s shoes to write from their perspective. When writing songs, he likes to write about what he thinks should be brought to people’s attention in a way that can also entertain.

He mostly performs in Boone, Asheville, Greensboro, Charlotte and Greenville. His music can be found on Soundcloud, YouTube and Vimeo and will soon be on Spotify.

Right now, he has three albums out: “Cosmic Canvas,” “Lil Tape” and “One Up”. He is also currently working on an EP to be released this summer titled “Where the Waterfalls.” This summer he will head to California to meet with connections and work with producers on new material.

“Music is emotion to me,” he said. “It’s really rewarding when someone comes up to be and tells me they’re inspired by my work ethic, my thoughts and that I’ve made them see things differently. I do it because it’s always been a really good release.”

Seers has always loved words and turning them into something new by playing with their meanings. He has a passion for articulating his thoughts through music. He sees so many artists making unoriginal content, so he strives for originality in all that he does. He always tries to make his songs something that wouldn’t be considered the norm or be heard regularly.

Their next show in April 15 at the Black Cat in Boone, NC.