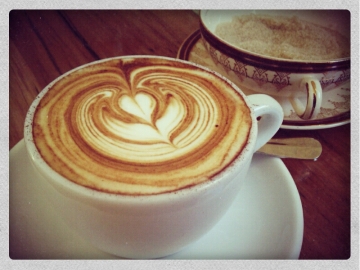 Eric Sommer is well known for maintaining his authentic style of playing guitar. He performs in over 280 shows a year while traveling. He recorded an album in Brooklyn with his band in March and plans to have it released by the end of May.  For the month of April, Sommer has been performing music live at local Common Grounds every Wednesday.

Sommer became familiar with Greensboro from the times where he traveled from Chapel Hill to Texas and Arkansas. He befriended local musician, Matty Sheets, and they performed at open mics nights together. When Sommer discovered he would be in the Chapel Hill area during the month of April, he decided to come out to Greensboro to perform at Common Grounds.

“The soap box is gone, but the open mic is the last available forum for anyone to get up and show their talents,” Sommer said. “When you think about our situation now – our country, the world – it is in such terrible shape that everybody should be speaking out and writing songs to try to make a difference and change this mess.”

Sommer used to perform for 20,000 seat arenas during the beginning of his musical career with other bands, but now it’s important for him to play more intimate settings, to develop relational type of musical shows so that he may communicate with the audience.

Sommer started performing early in his youth at 12 or 13, and music under has been under his belt for thirty years now. He attended Emerson College to study music theory and later went to Berklee College of Music for his post-graduate degree in arranging music.

“What really got me going was private lessons with David Landau. His brother managed Bruce Springsteen,” he said.

He’s has been playing this style of guitar for 25 years now and describes it as a, “percussive, acoustic and explosive style that is loud and rocking.” He learned this type of a style from a man named Steve Howe, who is in a popular progressive rock band. When he plays his guitar his techniques often include lap-slapping and an impressive finger picking style.

“There’s nobody else who plays this type of style. It’s distinctive. It’s mine,” he said. “It’s nice that I’ve got something that is my own identifying style,” Sommer added.

He first began in the punk and new wave genre, playing with The Atomics and now identifies himself with the genre of roots-rock with punk influence associated with it.

Though he grew up in Southeast Asia, he began his musical career by performing in Boston, Massachusetts and has since then has toured all over the United States and Europe.

When in Europe, he was based in Denmark and played everywhere from Edinburgh, Scotland to the French Rivera and many shows in England. In the United States he has played in hundreds of towns from Bangor, Maine down to Savannah, Georgia, and all the way out to Texas, up to Chicago and on to Minnesota. This summer he plans to go perform in Montana, Seattle, Vancouver and Los Angeles.

“The world is so fucked up, there so much badness out there,” he said. “There is no chivalry anymore, no honor and honesty – it’s always about what you can get away with. That’s terrible. The great thing about performing is you get to make a difference,” he said.

He stated that his favorite part of performing was the drive to communicate with others, that he gets to make an impact on others and be extraordinary.

“Try to change this trajectory that we’re on, and get people to focus on doing right and being good. It’s not that difficult, but it takes a commitment to stop lying, to stop cheating and to try to be transactional,” Sommer said.

Sommer writes his own music and says his inspiration comes from snapshots from life.

“I try to capture interesting things and try to capture them in my mind and then write to that,” Sommer said. “A lot of it is a stream of consciousness and eventually stuff comes out – a song. It goes through a whole process before you have one that works.”

The last three Wednesdays, Sommer has filled Common Grounds with acoustic sounds, soulful melodies and a style of guitar picking that is hard to come by. Listeners often engage with him and dance to the tunes he’s making. Sommer’s makes it a point to take a break during his set and speak with people that have come to enjoy his music.

His last performance at Common Grounds will be Wednesday, April 27 from 7p.m. until 10 p.m.