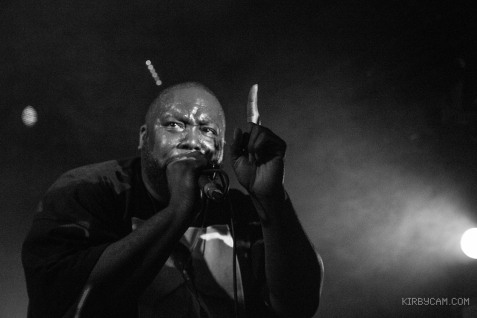 School is officially back in action, but that does not mean we should pout thinking about the loads of work soon to be crowding our desks and our minds. No, instead we should be excited over the upcoming procrastination-filled nights and weekends with our current and soon-to-be friends, where we can take a break from the stresses of academia and have a good time. So, if you are still wondering how you are going to fill those nights, there’s two upcoming concerts you might just want to check out.

Run the Jewels and Marching Church, a rap duo and an alternative rock band respectively, are coming to Raleigh. If you are new to hearing about either of these bands, that’s fine, because so am I. However, I think you may just find something interesting in either of them.

Run the Jewels, made up of two cast-off rappers- Killer Mike and El-P- released their third album RTJ3 in December of 2016 with appearances by Joi, Danny Brown, Tunde Adebimpe, Boots, Trina and Kamasi Washington. This earlier than planned release date shook some waves of excitement by their followers who had been anticipating this album since RTJ2 came out in 2014. Their previous album ranked high, if not number one, for best album of the year for most music publications.

After being introduced in 2011, El-P produced Killer Mike’s album R.A.P Music, and ever since then they put all of their solo efforts into being a duo. Now, with their hip-hop style and gritty rhymes they have broken into the eye of mainstream media, seeing stylistic bleed-over into artists like Kanye. From what I’ve read and the music I have listened to from RTJ2, their newest album is more of the same, with slight misanthropic lyrics and nearly static tempo..

RTJ also took the opportunity to comment on the recurring disappointments of the past year, taking this in stride through their lyrics by rhyming about police brutality, Trump as president-elect and psychological suffering. The integration of real-world social commentary doesn’t mean the hip hop duo does away with the building blocks of rap with songs that are more inward or lifestyle focused, but they are openly examining the political and emotional changes of the world since their last album.

My top pick for this album would be “Down” because of Joi’s well-fitted appearance in the chorus, and its genuine verses tell about how they sobered up to life. My second top pick would be “Legend Has It,” because its tempo changes more than the other songs on the album, giving it a little change of pace that makes listening easy.

If you are in the mood for a highly anticipated performance by this hip-hop meets rap super duo than you should go buy your tickets now because they will be at The Ritz in Raleigh on January 20.

Now if rap isn’t your go-to genre of music, then you are in luck because Marching Church, a band from Copenhagen, Denmark might peak your indie-loving ears. The lead singer, Elias Bender Ronnenfelt, the former lead of the band Iceage, originally created this ‘group’ as a one man band. However, with a less than successful freshman attempt on his album “This World is Not Enough,” Ronnenfelt gathered some old band members of Iceage including Johan S. Weith, and created a full fledged band.

As it sounds by the title, Ronnenfelt’s first album after Iceage was melodramatic to say the least. Yet, his second attempt is less high school emo-esque and more put together, with high attention on his verses. Ronnenfelt speaking on his newest album, “Telling It Like It Is,” said to a reporter at Pitchfork publications, “We wanted it to sound like a studio and the instruments, as if the studio became a member of the band…We didn’t want it to sound like a realistic live band playing”. Now, I’m not sure how well that translates to live performance, but I can see what Ronnenfelt means, because there is an obvious empty sound behind their music.

Though this album has less high school moodiness, it still features Ronnenfelt’s care-free moaning voice, with some seductive moments in songs like “Lion Den”. They feel like a grunge throwback band with their nihilistic-lyrics, but with looser instrumentals. Some of my top picks from this album are “Heart of Life,” with its comical lyrics and “Inner City Pigeon,” with its eerie background vocals and its 90s punk feel.

If Marching Church feels like a fit for you then make sure you stop by their show at Kings in Raleigh on February 1.

Now that the Christmas cookies have been eaten and the New Year’s kisses have been given it is time to get back to class. Everyone will soon be hunkering down to study too many days of notes and finishing assignments at the last minute, so before that happens get up during syllabus week and check out one of these upcoming shows. Having something to look forward to always makes the school year go faster, especially when that involves new music experiences just an hour down the road.

Like Loading...
‹ These towns they are a’changin: The realities of gentrification
Flawed but not fatally: The unnecessary repeal of ACA ›