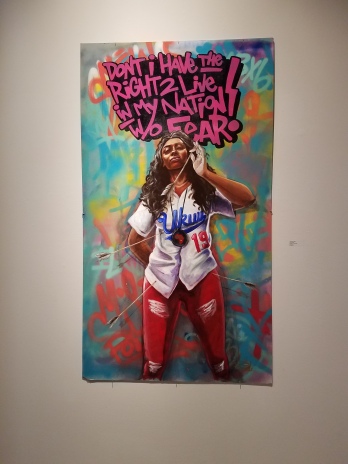 The Center for Visual Artists (CVA) held the Urban Affairs Film Fest on April 22. Art was on display, films were shown, collaboration sketch books were passed around and a few local artists shared their reasons for becoming street artists.

For this month only, CVA gallery held the Urban Affairs exhibit, which came to a close on April 21. The film fest was a final celebration of the exhibit and the local artists that displayed a few of their special pieces.

As visitors walked into the exhibition, mouths instantly opened as they saw vibrant colors bleeding off the stark white gallery walls. First, a chair installation sat to the visitor’s right, showcasing a mess of used folding chairs tangled into a pile and spray painted popping pinks and oranges. To the visitor’s left was a spray painted picture of an African American woman overlaying an already graffiti-inspired background. Above the woman read, ‘Don’t I have the right 2 live in my nation without fear,’ as her body was being impaled by flying arrows.

The art was all done by different artists, but they had a sense of uniformity in the way they all tended to use an overlay of words and designs, and graffiti-inspired neon colors with thick lines. Some art felt as though you have seen it before, passing by your waiting vehicle or ornamenting the walls of city buildings. This exhibit put heavy emphasis on the artist’s bold linework, some of which resembled an animated version of dripping paint.

Another recurring theme in the exhibit was the reusing of old objects and furniture, turned into art with newfangled meanings. The exhibit was home to painted tables, cushioned chairs, broken or used skateboards, a mannequin and a jacket that would have been fashionable in the ‘80s.

As most graffiti seems to do, many of the pieces felt as though they held one message: corrupt the norm. The exhibit itself honors those who have a passion in all forms of street art, including graffiti and murals. This exhibit, essentially was a thank you to all of the people who make our public places a little more interesting with a pop of paint and an anonymous message the artists want seen in public.

The movies shown at the fest were “Exit Through the Gift Shop” and “Girl Power.” Both were documentaries featuring the two very different lives of people creating street art.

“Exit Through the Gift Shop” is centered on Thierry Guetta, a Frenchman living in Los Angeles, whose passion is documenting the underground art scene. Narrator Rhys Ifans, tells its viewers the film is “the authentic story of a movement.” The film showcases Thierry’s journey of meeting Banksy, the anonymous English-based graffiti artist who has placed his political work all around the world.

Eventually after meeting, Banksy and Thierry become good friends. After years of filming, Thierry creates a movie named, “Live Remote Control”. Banksy is stunned by this eclectic arrangement of footage, and tells Thierry he should go into street art himself. “Exit Through the Gift Shop” takes a wild turn, rendering Thierry to rename himself – Mr. Brainwash, as he makes his way into artistic stardom.

After a short intermission, the fest continues with “Girl Power,” a foreign documentary based solely on female street artists who make their trek around different European cities, interviewing women artists and showing their work as it is illegally completed. It is a dark film, revealing the underground art culture for what it is – a sly fight against getting caught. The main women always cover their faces to leave their identities secure, as they are shown running away from security guards. The documentary, as the artist’s being filmed see it, is supposed to be an inspiration for all the female graffiti artists that do not feel they are recognized in the culture.

The highlight of the Urban Affairs Film Fest was getting to hear the local artist’s themselves. This included small speeches by Kendall Doub, Sam Peck, Freddy Garcia, Sidney Stretz and Jeff Beck. Each of the artist’s told the small and intimate audience the reasons they became involved in street art.

All of them attributed different reasons, including Doub who changed from creating Fine Art to Street Art because it was on a grander scale. Other artists, such as Peck, whose own spliced installation ran across the back wall behind the movie screen and onto another, said that he likes art that is removeable. Garcia, an artist well-known to the brick siding of many Greensboro buildings, talked about his newest work at the Glenwood Recreation Center.

The Urban Affairs Film Fest was a relaxing and enjoyably entertaining way to end the exhibit with a group of thriving local artists.