Division in the Country Reflected in the NFL 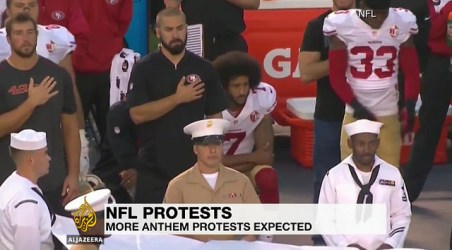 It was not until week three of the 2016 preseason for the public to notice, then San Francisco 49ers quarterback, Colin Kaepernick was not standing for the National Anthem to protest police brutality towards people of color and injustice in the court system. At the time, Kap was not kneeling next to his teammates, but instead sitting on the bench. The next week was the beginning of the kneeling for the National Anthem. Why the change? Former NFL player and Ex- Green Beret, Nate Boyer, met with Kaepernick to discuss his protest. Kap was sitting, Boyer, though acknowledging Kap’s Constitutional right, expressed a desire to stand, and a compromise was made for him to kneel. An open dialogue between two opposing sides that ended with a solution both could live with.

Oh, how the times have changed.

One year later, Kaepernick is no longer part of an NFL roster, and if you honestly believe commentators saying that is because “he’s not good enough,” then there’s a prime piece of real estate with your name on it on the moon you can buy using the money a Saudi Prince will award you after lending him your social.

In Kap’s absence, other NFL players have taken up (or kneeled down) to continue the protest. Then, in the days leading up to the third week of the regular season, President Donald Trump gave his opinion of the protest, referring to the players as “sons of b******” and how he wished owners would “fire” players who kneel for the anthem. That week saw the largest displays of anthem protest, from players kneeling, teams locking arms in solidarity and multiple teams staying in the locker room during the National Anthem.

So what has been the reaction to the reaction? Well, Miami Dolphins head coach Adam Gase and Dallas Cowboys owner Jerry Jones have publicly told their teams to stand for the anthem. FOX and ESPN have opted to not show the anthem’s performance, the commissioner’s office have discussed internally ways to end the protest, though they have no intention of forcing a standing policy like that of the NBA. Even Vice President Mike Pence decided to weigh in with his own political statement by departing early from an Indianapolis Colts game, claiming on Twitter his reasoning was because of the players’ protest.

We can ask how did we get to this point, but we should really ask why did we get to this point? Why was the singular act of Colin Kaepernick, who saw issues of inequality in the United States, lead to a point where there is a divide in almost every locker room between teammates, coaches and management? Why did this not become an analysis on systemic inequality in the country and instead became a litmus test on how patriotic one is? And why is a young, talented quarterback in his prime who has played in three straight NFC Championship games and was two yards away from being a Super Bowl champion out of the league?

Kaepernick was and is a scapegoat. Put all the issues of the game on him, walk him out of town and leave him to die or kill him. Which, at the end of the day, accomplishes absolutely nothing. All that happened was that the inevitable was sped up; Kaepernick was going to eventually retire from football like every other player. He was going to play his final game and go away. What was not going to leave by just creating a scapegoat or adopting a “see no evil, speak no evil, hear no evil” concept are the reasons he and athletes around the country knelt.

Getting rid of players who kneel will not end this. Forcing a policy of standing for the national anthem will not end this. Listening to Donald Trump will definitely not end this. There are no easy, short solution to this issue. Racial inequality has plagued this nation for 398 years, when the first slaves arrived in Virginia. It predates the country’s inception.

Nate Boyer and Colin Kaepernick sat down more than a year ago and came to an understanding, leading to a plan of action and a friendship between the two men. Maybe the answer to why the NFL is in a state of division is because there are not enough leaders like Boyer and Kap leading this league, and the country as a whole.