Home › Arts & Entertainment › Artist Weekly › How Does Our Past Influence Our Art?

How Does Our Past Influence Our Art?

Aspiring Greensboro artists and art aficionados were able to participate in a Q&A dialogue teaching valuable lessons on the subject of painting this Wednesday, thanks to the help of two local experts, Renzo Ortega and Antoine Williams. The session was hosted with the help of the GreenHill Center for NC Art as part of its ongoing “Two Artists, One Space” event.

Ortega, a recipient of the Queens Council on the Arts New Work Award, is known for his vivid and surrealist paintings displayed in numerous exhibits in locations such as Greensboro, New York, Austria, Chile and Perú. His work was also on display as part of the “Art on Paper” 44th Exhibition for Weatherspoon Museum.

Ortega’s new exhibit in the GreenHill space showcases the influences that growing up in Latin America and moving to New York have had on him. The work is painted on not only canvases hanging from the ceiling, but on a series of boxes laid throughout the large interior room as well. The paintings make use of bold and distinct shades of red, black and white to bring out contrast.

Williams, a renowned artist and professor of art, is known for mixing the ideals of activism into his numerous works. As a co-founder of the God City Arts Collective, he was able to find a passionate audience for the fine arts in the city of Charlotte. His newest paintings display images of black youth while using tangible objects such as wood, flags and plastic. 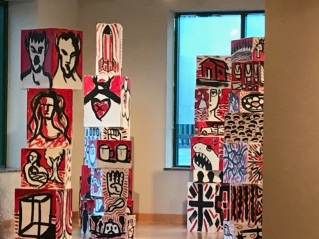 Both Williams and Ortega spoke passionately for over an hour on how their specific cultural backgrounds gave them great inspiration to draw upon for their art. For Ortega, this came from the blossoming punk rock scene in Lima, Peru. For Williams, his inspiration was said to be driven from observing graffiti and street art as a youth.

Later topics discussed through the night involved a focus on valuing one’s heritage alongside past experiences, and a debate on whether anyone can become a great artist. Questions came from a multitude of students from colleges across Guilford County with a good amount stating their plans on pursuing a career in the field of art.

“I believe a painter can paint on any surface, we cannot limit ourselves to the canvas of the paper. Why do I use the boxes? It is related to my cultural background, it is related to the folk,” said Ortega, while describing why he chose to paint on a myriad of cubes. “Folk art is very important, it is a part of our identity.”

Discussions soon went on to detail the importance art can have in a local community. Alongside their accomplishments in the art world, both men have ties to the world of music in their local scene. Williams’ God City Arts Collective provided Charlotte with rap concerts along with murals and paintings while Ortega has a career making underground music that has spanned years.

Shortly after the event ended, Williams explained the reasoning for GreenHill hosting the Q&A session and why educating young people in the arts is so important to him.

“Around the ages of six to seven, we teach our children how to read words but we do not really teach them how to read visual language. That’s another type of literacy, visual literacy,” Williams said. “Oftentimes there will be students with this type of intelligence, but it is not looked at as anything worthwhile. They can be creative but it will get pushed to the side.”

Explaining further, Williams said “When we see a kid that can draw, they are told that it is not useful or productive. I disagree. If you know how to draw or paint, that means you know to solve problems or think critically. That is what we need in the future.”

GreenHill’s “Two Artists, One Space” is available to the viewing public for free and is on display until Nov. 5.