UNCG Soccer: Center back Damon Youmans has big plans for the future 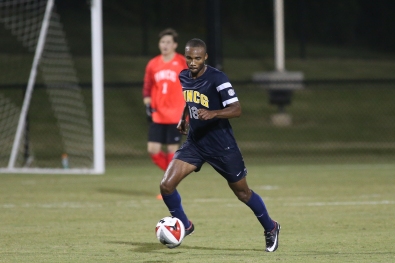 Sophomore center back Damon Youmans, hailing from Charlotte, did not always think he would be a starter on a Division I soccer team. When he was young, his favorite sport was basketball, but that all changed when he moved to North Carolina and was introduced to soccer. Still, it did not get real for him until a wakeup call in his sophomore year of high school. “I knew I was good at soccer my sophomore year in high school when I started getting contacted by recruiting coaches and my name got really popular in Charlotte.”

Damon knew UNCG was the school for him the moment he stepped on campus on his official visit. “During the recruiting process, I visited schools like Clemson, UNC Charlotte, Marshall and was in contact with many more,” Youmans said. “What helped me make my decision easy with UNCG is as soon as I got on campus on my visit it immediately felt like home. I knew this was the place for me.”

Youmans quickly found his place on the team, joining a rotation of three center backs anchoring the Spartan defense. Highly touted out of high school, hopes were high, and he was delivering until he went down with a knee injury and was sidelined for the rest of the season. “It was very tough for me not only because I was hurt but I had a big role because we only had three center backs, me being one of them. So when I went down, I was really hard on myself.”

Luckily, the knee is healing well, and he should be back for the fall 2018 season. He’s set himself some high expectations for his sophomore season. “My individual goal is to make the first or second all-conference team, which is very hard for defenders to do. Also, I would like to get my name out there more. The team goals are to make the NCAA tournament and win the SOCON. Nothing less.”

Alongside rehabbing his knee, Youmans has been improving other parts of himself. Damon Youmans is a person who stutters, and it’s been a part of him for his entire life. He has dealt with it in a variety of ways. But since arriving at UNCG, he decided to enroll in a speech therapy course offered by the UNCG Speech and Hearing Center, and it changed his life.

“When I was younger, stuttering made me a little shy but I always loved meeting people,” Youmans said. “…Throughout my life I’ve overcome stuttering in many ways, both good and bad, avoiding speaking situations or telling someone to say something for me. Now that’s changed. I’ve become much more confident and grown to love my speech. I take a speech therapy course at UNCG which I love, and the therapists there are amazing. Also I am in a support group that meets once every week, and we talk about the good and bad going on in our lives. We practice speech, but it’s also somewhere that we can feel comfortable and just talk.”

There have been a few instances over his career where he’s encountered issues with stuttering on the soccer pitch, but as he’s grown and learned, those instances are fewer and fewer. “Of course you encounter those opponents who find it funny to hear someone on the other team with a stutter, or even some of my teammates who maybe never had a teammate who stuttered so they would laugh at first. Now that it’s gotten better, I’m not afraid to confront someone about it or just tell anyone that I do stutter.”

The keys to Damon’s success are utilizing the resources the University offers its students while building strong networks of positivity and support around him that will prepare him for the real world. “Right now I have a lot of help, my academic coaches, my athletic coaches, even my speech therapists. Everyone is helping me now, and I’ll keep using the help for as long as I can but I know soon I will be on my own and have to take on life.”

And what does Youmans, currently an undecided major, want to do once he leaves UNCG? “I’m undecided right now, after college I want to continue my soccer career in Europe of become a inspirational speaker to young kids.”