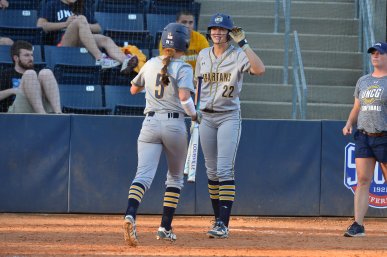 UNCG’s Softball twitter account has been counting down the start of their 2018 season for thirty-four long days, which will finally begin on Friday. The team will start their season in South Carolina competing in the Kickin’ Chicken Classic at Coastal Carolina where they will face heavy hitters like Iowa State and the tournament host Coastal Carolina. After that, the team find themselves heading south to the Eastern Michigan Madeira Beach Spring Invitational in Florida where they will face heavy hitters Massachusetts, Ohio and Virginia. A very fast start to their season can give the team a nice standing if they perform, which should be no trouble for this team.

With the support from the SoCon, the team has a lot to prove this season. Facing teams like Virginia, Georgia, and Appalachian State during the spring will test the team’s ability to deal with adversity. Facing teams from the ACC, SEC, and Sun Belt conference illustrates a confidence in their abilities to match up against the top conferences in the nation. The schedule brings images of last year’s 6-3 win against UNC-Chapel Hill. Playing against these teams is an important step that UNCG must take if they wish to be taken serious by bigger conferences. They are no longer the underdog. With all the tools that the is team has in their belt, it is time to prove that their brand of softball matches up with the best teams they’ll face this year.

Coach Janelle Breneman will be losing vital pieces to her team when the senior class graduates, though the team signed five freshmen for the year, all hailing from North Carolina. The careful recruiting process is in place so that the team can keep the strength and vision it has always had as they move forward. The two tournaments that start the season off will be a prime moment for the underclassmen to step up in a more relaxed setting. Building their confidence on the field alongside all-SoCon players will be a major step for success within the coming years for the team. With all the conference hype around the team during their preseason, following baseball last spring and women’s soccer this Autumn and winning the SoCon championship will do wonders for the teams recruiting.

The team starts their conference play March 24 against the Furman Paladins at the UNCG Softball Stadium, with non-conference games against Charlotte, UNC-Chapel Hill, Presbyterian, Campbell and NCSU sprinkled in-between. An exciting addition this year for the team is that significantly more of their games will be hosted on ESPN3, an ESPN affiliate channel. This opportunity for more people to access the games can have a great impact for the team. Most of their appearances on ESPN3 will be during conference play, this will also bring an audience to the SoCon play. While these improvements may not seem like they will alter UNCG’s softball overall, they will have long-lasting effects on the success of recruiting by the team.

Make sure to catch the team open their first home game at the UNCG Softball Stadium on Feb. 23 at 2:30 p.m. where they will be hosting Seton Hall in the UNCG Invitational. They will also be hosting Virginia and Appalachian State during the tournament. It will be a first great look at the team after they’ve been road-tested. How they perform at home may be how the rest of the season will look, a big weekend opener for the university and the team.