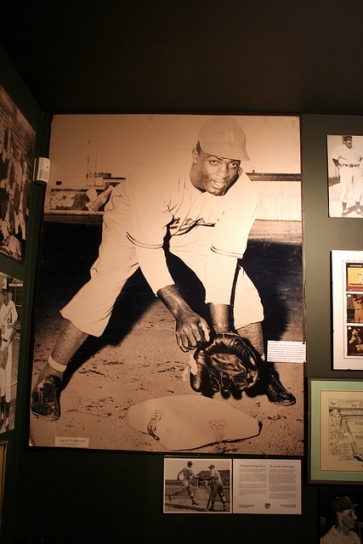 Chadwick Boseman’s portrayal of Jackie Robinson in the 2013 biopic, “42,” illustrated the realities of being an African American ballplayer when the color barrier was first broken. Pitchers threw at Robinson in an attempt to seriously injure him at the plate. He was spiked and kicked at by players when sliding into base. And, as shown in an uncomfortably, well acted scene by Alan Tudyk playing Philadelphia Phillies manager Ben Chapman, Robinson had to tolerate the most vicious taunts and racial slurs hurled at him by opponents and fans.

Robinson wore the metaphorical crown of thorns for baseball players entering the sport. Though racial slurs and condescending beliefs and comments from average fans to high office executives in the sport continue even today, Robinson opened the door for players of color being able to play the game professionally without having to worry about physical harm from opponents. However, players of color were not always protected in the venues not under the same public eye as Major League Baseball.

Chapman’s tirade put a black mark on the Phillies organization and by 1948, he was fired. Players who threatened to strike if Robinson played were then threatened with banishment from the sport. Dodger players like Dixie Walker and Kirby Higbe were traded to basement dwellers by Branch Rickey. While Brooklyn and other teams supported their black players in the majors, the Minor Leagues were another venue with different challenges.

Minor League baseball has far more teams located in the south than Major League teams. Also, unlike the massive stadiums where MLB teams play, minor league baseball stadiums are smaller, and fans are closer to the players than in a stadium. They’re more like high school and college fields than Ebbets Field or Yankees Stadium. Also with minor league teams, they do not have the national spotlight that the majors have, meaning the only eyes that are seeing any mistreatment are the people in the community.

In 1953, a 19 year old Hank Aaron was one of three people of color, along with Horace Garner and Felix Mantilla, to integrate the Southern Atlantic League’s Jacksonville Braves. Aaron’s hitting knocked the socks off scouts in the game, but playing out of position in the infield, his defensive play was subpar and led racial jeers directed at him by both fans and his own teammates. Joe Andrews, a teammate of Aaron, recalls a statement after a fielding error from Aaron led to a loss.

“We had a pitcher and he made a comment to the extend of ‘you can’t trust a ni**er. When pull comes to tug, their going go in the tank every time.”

Aaron’s racial abuse did not end there. In the first integrated baseball game in Augusta, Georgia, Aaron hit a homerun in the first inning. When Jacksonville took the field for the bottom half, fans began throwing rocks at Horace Garner who was in closer range compared to Aaron, leading to an early end to the game.

Aaron was not the only player to suffer from fan interaction. His contemporary and fellow Hall of Famer, Frank Robinson, while playing in Columbia, South Carolina, had to be restrained by teammates following a game when he attempted to attack two fans in particular for racist comments directed at him during the game. A decade later, another power hitting outfield in Reggie Jackson was playing for the Birmingham Athletics, and former news writer for the Kansas City Daily Press described life for Jackson and other players of color.

“They couldn’t even go out their hotel room at night, it was so bad. The white guys could all go out, but the black players had to be very careful what they did.”

On the road, diners and restaurants were still segregated, meaning that players of color were either forced to find a different place to eat or have a teammate bring him something to eat on the bus. Players of color had to sleep in different places as motels were commonly segregated as well. And what needs to be remembered in all these circumstances for the players named and the one’s unnamed, many of them were still in their teens. When Robinson was signed by the Dodgers in 1945, he was a 26 year old man who had years of military experience to prepare him for the harassment he endured.

Minor League baseball is meant as a development league for players to improve their baseball fundamentals, and mature for the professional level. That should be the case, but for players of color, it also was a gauntlet to toughen their skin and see if they will be able to handle playing in a very white sport.