Home › A & E › Review: Jens Lekman Sells Out The Pinhook 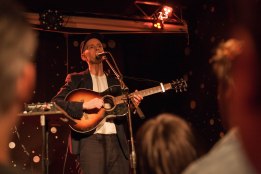 Within the last few weeks, every band ever has announced a spring show in North Carolina. Sure, that’ll be great down the road, but it can be difficult staying patient until then. However, sometimes a gem sneaks its way into these sparse winter lineups.

Jens Lekman serenaded a sold-out Pinhook on Friday night. The Swedish singer-songwriter, armed with only an acoustic guitar and sampler, filled the room with his soft melodies and witty lyrics. The audience swayed back and forth, singing along as he played romantic tunes such as  “Your Arms Around Me” and “Shirin” off his classic LP, “Night Falls Over Kortedala.”

As the show progressed, Lekman put down the guitar and took to the sampler, which allowed him to recreate the electronic beats of his latest album, “Life Will See You Now.” The energy grew and the audience danced along to newer tracks like “What’s That Perfume That You Wear?” and “To Know Your Mission.”

During songs, Lekman would often interject explanations and anecdotes, sharing stories involving his previous hairstylist, hotwiring a Ferris wheel and an awkward encounter with a girl’s father. Lekman would launch back into singing on beat every time, showing off his impeccable timing, both as a musician and as a storyteller.

Lekman’s dynamics were also quite impressive. His voice rang clear at all times and used the manipulation of volume to his advantage. He naturally faded out on songs, lowering in volume until he was completely silent.

For the encore, Lekman returned to his acoustic to perform favorites like “I Want a Pair of Cowboy Boots” and “Postcard to Nina,” and let the audience select a song, “Waiting for Kirsten.”

Peter Oren, a folk singer from Indiana, opened for Lekman. The choice seemed odd at first, as Oren’s gruff bass voice and bleak lyrics evoke a much more somber mood than Lekman’s music. However, Oren possesses a dark sense of humor and knack for storytelling, which, matched with a similarly stripped-down live set, complemented Lekman’s style. Oren, having released his second album titled “Anthropocene” late last year, centered a lot of his songwriting around the current geological age. Like most folk acts, nature is a common theme of his music, but Oren is a bit more specific, often singing about humanity’s exploitative relationship with it.

The best aspect of the show was the audience itself. While Lekman might not be a household name, he does have a devoted cult following. The crowd was excited for the Swedish singer, but still respectful for Oren. After the show, dozens crowded around the merch table just for the chance to meet Lekman.

Michaela Dwyer, a dance writer for Indy Week, was no stranger to Lekman’s live show.

“I’ve been a fan of him for a long time,” Dwyer said. “I saw him at Cat’s Cradle in Carrboro the last time he was here. A friend of mine introduced him to me shortly before that first show.”

Thomas Thorne, an alumnus of UNCG, was just as thrilled to see his “favorite Swedish rockstar” for the third time.

“He seemed to be really in tune with the audience,” Thorne said. “He covered a bunch of the new stuff, but most of my favorite songs.”

The last time Lekman played in the Triangle was 2012 at Cat’s Cradle, so it’s impressive that so many fans had seen him multiple times. Still, there were a few newbies in attendance.

Megan Gunderson, the Associate Director for UNCG’s performance program, had never experienced a Lekman show before.

“It was awesome, it was my first time seeing him perform live,” Gunderson said. “I was surprised by the evolution of the music throughout the show.”

While he probably won’t be back anytime soon, Jens Lekman sure puts on one hell of a show.