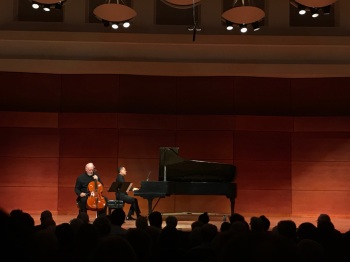 Saturday night, the one and only Lynn Harrell performed a cello recital at UNCG as a part of the University Concert and Lecture Series. From Boccherini to Beethoven and more, Harrell showed off both his virtuosity and sense of humor in an exciting evening full of music.

Last week marked Harrell’s second residency at UNCG in as many school years. He spent many days in rehearsals with string students, culminating in a chamber concert on Monday. He also offered a masterclass, where he shared his best advice and expertise to performing music students. Spending time with a world-renowned musician such as Lynn Harrell is truly invaluable, and he has left a mark on the school of music.

Saturday night was Harrell’s chance to perform for a Greensboro audience, full of music students and community members alike.

He opened the concert with two contrasting movements from the Cello Sonata No. 4 in A Major by Boccherini, an Italian composer and cello virtuoso. As a cellist himself, Boccherini pushed the technical boundaries of the instrument and the musician in his works, making them very difficult, yet rewarding. These two movements proved no match for Lynn Harrell’s talents, as his fingers delicately and smoothly ran the lengths of the fingerboard.

First came the Adagio movement, slow and beautiful with many decorations and ornaments. Its lyricism and relaxed tempo served opposite to what followed – a quicker, technically demanding Allegro moderato movement. Though this is traditionally the first movement of the sonata, Harrell chose to place it after the Adagio for this recital to demonstrate contrast with the following piece.

Next came a piece by Schumann, also two Adagio and Allegro movements. Before playing this piece, Harrell explained that he programmed the Boccherini and Schumann together to demonstrate how differently two composers could interpret the same tempo markings and instrument. Boccherini was much more focused on technical challenges, while Schumann was more concerned with lyricism and a song-like character.

For Harrell, this offered an opportunity to demonstrate the different facets of his unending musical talent.

Harrell’s tone was so lush and beautiful, his cello soaring over melodic lines. The beauty was only elevated by pianist Victor Asuncion, who provided flawless accompaniment and swelled to make the most of his lyrical moments. Together, the two made an unbelievably musical and talented team.

A highlight of the evening was Beethoven’s 7 Variations on “Bei Männern, welche Liebe fühlen,” with a theme based on a duet from Mozart’s Magic Flute opera. It offered Asuncion a chance to shine in a more prevalent role, taking on much of the melody and trading it back and forth with the cello. Some of the variations were melodic, while others were quick and playful. It was clear that Harrell was having a lot of fun with it.

After an intermission came the largest work of the evening, Beethoven’s Cello Sonata No. 3 in A Major. Harrell noted that it was written during an extra impressive time in Beethoven’s career, as they were composed the same year his famous Fifth and Sixth symphonies were premiered.

Considered the first cello sonata where the two instruments are given equal importance, this piece offered many chances for both Harrell and Asuncion to demonstrate their virtuosity. Running just under 30 minutes in length, it’s a sizable work that flirts with many different tempos, characters and styles.

From cadenza-like moments in the first movement to a playful scherzo to the beautifully expressive ending, Harrell and his cello made the most of every note.

The night ended with the Andante movement from Rachmaninoff’s Cello Sonata in G Minor, a slow and beautiful work that left the audience with a peaceful and reflective mood. Though a loud and energetic ending is an exciting way to end a lengthy recital, Harrell proved Saturday night that a quiet and beautiful closing moment is just as effective.

This memorable evening with Lynn Harrell was a part of UNCG’s University Concert and Lecture series, as well as a partnership with the University Libraries. The closing event of the series will be a lecture with Michael Kimmelman, critic for the New York Times. For more information on this event, check the College of Visual and Performing Arts website.