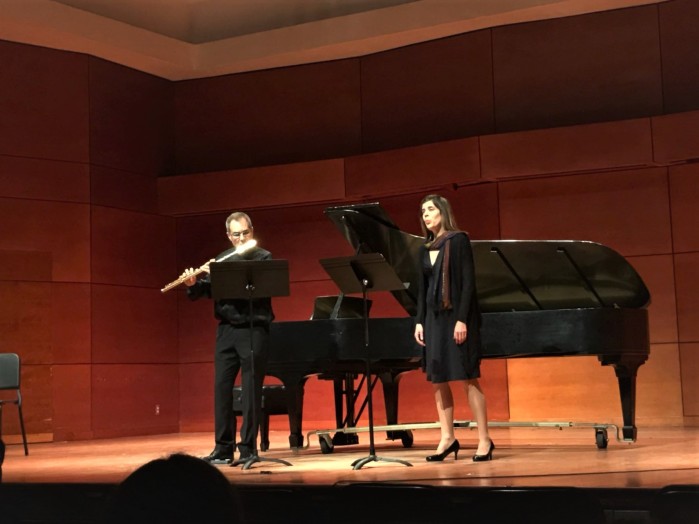 On Friday night, musicians and community members alike gathered in the music building’s Recital Hall for a concert full of new music.

It was a part of the Collage Chamber Series, which aims to present a variety of genres and music that represents the diversity of music students, faculty and special guests in multiple concerts throughout the season. Each year, this series kicks off with the annual Collage concert, a collaboration with the entire school of music, an epic event that makes the most of musical diversity.

The evening opened with “At the Edge,” a piece for saxophone and fixed media composed by composition graduate student Robin McLaughlin. She said she was inspired by science fiction, hoping to capture its unique imagery and philosophies alike.

“Science fiction,” McLaughlin said in an introduction to her piece,“is at the edge of what we know and what we don’t know.”

Faculty member Steve Stusek gave this premiere performance of “At the Edge,” his smooth saxophone sounds soaring over the ambient melodies. This piece was interesting to listen to, evocative of mystery and exploration.

It served contrast to what followed: John Corigliano’s “Three Irish Folksong Settings,” performed by husband-and-wife duo Carole Ott and Tadeu Coelho. Soprano voice and flute is an interesting pairing, but it provided a beautiful musical setting to the light and romantic poetry.

John Corigliano is one of the most highly regarded and celebrated American composers of the present day. His exploration of text settings are unique and strangely beautiful, and Ott’s voice was the perfect vehicle for these folk songs. Though the music was often modern in sound, particularly in the flute part, there are stylistic and melodic influences of folk music that come across clearly to any listener.

Together, Ott and Coelho perform regularly as Anima Vox, making the most of the repertoire for flute and soprano duet. Their sounds blend together seamlessly, and hearing them perform together was a highlight of the evening.

Before the performance, Rutty joked that he had avoided writing for solo piano for 25 years. Now was the time, and he hoped it was successful.

And indeed it was – the piece was an intriguing exploration of the range and character of the piano.

This served as a preview for another music event that evening. After this concert came another, which was the premiere performance of Rutty’s CD, “Exhaling Space.” With influence by South American styles and a close attention to melodic and rhythmic detail, Rutty’s music is creative, unique and a treat to listen to.

Mark Engebretson’s “Desire,” has an interesting origin story, rooted in collaboration. He wrote this piece for flutist and faculty member Erika Boysen, who often enjoys pushing the limits of what a flute can do. Boysen performed atop a soundscape, which happens to be an aural collage of her previous recordings for Engebretson.

Engebretson decided to incorporate a voice part into the piece, setting to music a brief, but impactful text by poet Brian Lampkin – who happens to be the owner of Scuppernong Books downtown.

The gist of the poem is, “I’ve always wanted to say it simply and then feel it that way,” speaking on desire. For Engebretson, he composed this piece in hopes of creating a sound that is hectic and frenetic in the face of the poem’s desire for simplicity.

The evening ended with ten of Berio’s brief “Duetti per due Violini,” or duets for two violins. Graduate students, Julia Reeves and Tracey Viator, performed these duets, and it was clear they had a strong understanding of their purpose. In fact, Reeves even recently completed a dissertation on the collection.

The purpose of these duets, other than for performance, was intended for students’ use. Each one explores a different technique, rhythm or other aspect of the violin. The movements were quick, but they were each unique. Clearly, each had its own purpose.

It served as a light, if not educational, way to end the brief but diverse concert.

Check out the School of Music online for more information about upcoming concerts hosted by the College Chamber Series, New Music Greensboro and more.