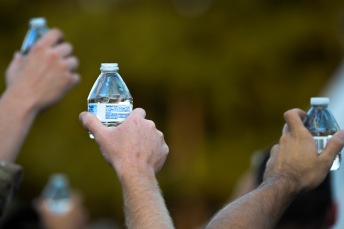 The City of Durham Department of Water discovered chemical contamination in Lake Michie and the Little River reservoir, two sources of drinking water for the city.

Lake Michie and the Little River are located just outside of Durham. According to Hazen and Sawyer, a company which proposed a project there, the Little River reservoir is the city’s second largest water supply.

According to NC Policy Watch, the compounds found in the water were the perfluorinated compounds known as PFOA, PFOS and PFB at concentrations of 2.4 to 7 parts per trillion. High exposure to these compounds can lead to cancer, hormone distribution, liver and immune system damage and thyroid changes.

While the EPA recommends at most 70 parts per trillion, there aren’t any significant enforcement regulations on the federal level.

The Assistant Director of Water Management in North Carolina, Vicki Westbrook, states that they don’t know the source of the contamination, but they have ruled out everything but air emissions and atmospheric deposition.

The only of the compounds found in Durham still being used in production is PFB, but the others are a persistent part of our environment. “[PFB] is used in flame retardants, metal plating, pesticides and water repellent coating,” said Lisa Sorg of NC Policy Watch.

The compound has also been found in other states like Alabama, Georgia, Pennsylvania and Colorado.

The EPA has forced companies to stop using PFOA and PFOS, but they still exist in the environment and are not likely to go away soon. These chemicals have a complex synthetic composition which makes them hard to break down by natural processes.

According to the US National Library of Medicine, PFOA was used to make things like Teflon. The side effects once consumed are increased cholesterol, increased uric acid levels and kidney disease. PFOS was also used to make Scotchgard which increases the risk of kidney disease as well. Just like the negative effects seen on humans, these contaminants also have negative effects on animals that consume them.

GenX, the compound that PFOS,  PFOA and PFB are related to, is found in water all over North Carolina according to the Associated Press. At this time, it’s unclear what the immediate effects GenX has on the population consuming it.

Public awareness about the compounds in local drinking water began about a year ago, but no legislation has been passed in North Carolina to effectively regulate them. NC Policy Watch states that it’s very expensive to detect these compounds, but scientists from North Carolina universities are working with lawmakers to fund an NC Emerging Contaminant Observatory, an organization proposed by Duke University Professor Lee Ferguson.

The NC Emerging Contaminant Observatory would be a new program built around the concept of early detection of these kinds of compounds that could hopefully prevent future consumption.

Like Loading...
‹ Continued Diplomatic Retaliation Between Russia and NATO Countries
John Bolton: A Dangerous Addition to the Trump Team ›