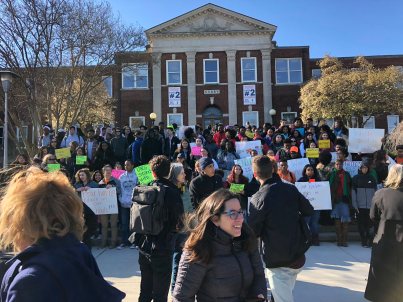 While seeing protests on college campuses is nothing new, a 2016 study by Inside Higher Ed found that more incoming colleges students than ever are interested in taking part in activism. This has been showcased by protests and movements such as Black Lives Matter, the Women’s March, the March for Science and now the March for Our Lives and its corresponding walkouts.

“There’s been so much coming to light about what’s been happening that students have had to take a stance, because many of the events have been happening to students,” said Kiara McNeil, a University of North Carolina at Greensboro (UNCG) freshman studying Recreational Therapy and Spanish. “There’s also the fact that it doesn’t seem like the adults, per say, are taking a stance so we kind of have to or nothing is going to get done.”

While McNeil has not been able to participate in the March for Our Lives or other protests because of time commitments, she has protested in other ways, such as signing petitions. Other UNCG students, such as theater student Zach Dunlap, are also unable to actually go to protests because they do not have the time.

“I would have like to participated in the march, but unfortunately I had to go to work. I talked to a few of my friends who went and they said it was one of the best experiences they’ve had, just watching people come together to march for something that they believed in,” said Dunlap. “It creates a sense of community for people coming together and fighting for what they believe in.”

According to Dunlap, the rise is student activism is noticeable, especially as someone who transferred from a small private school in Georgia.

“You actually see more people starting to rally and fight for something that they believe in. At my old school, in the middle of nowhere, the city was the school so there wasn’t much going on,” said Dunlap. “I had no problem with it, it was a great school, but coming here is where stuff is more openly accepted, more openly talking about. I’ve seen a lot of people come together to talk about raise awareness for the issues at hand for the moment.”

Karla Curucz, a Resident Advisor (RA) at UNCG, is another example of a UNCG student who would be willing to participate in protests such as March for Our Lives but may not be able to due to other responsibilities. During the March for Our Lives rally, she was on RA duty and was unable to leave campus. As an RA, however, she has also seen a rise in student-led activism.

“I interact with more younger people than people who are middle age,” said Curucz. “I do see that people in the college age or high school are more [politically] active and I think based on the perspective I have right now that’s impact by social media, and how we’re really tech-savvy and can use our internet sources.”

Not all UNCG students find marches such as March for Our Lives so appealing.

“I’m just not much of a protest person,” said sophomore music student Brian Arden. “I don’t have anything I feel passionately enough about to go out and hold signs. I guess I feel like I can make my voice heard in other ways—through voting.”

This does not mean that Arden disagrees with the protests in general, though.

“After the Trump election, a lot of students and teenagers and general got riled up in general about politics, which is something that hasn’t happened in a long time,” said Arden. “No matter what their point of view is, everyone’s point of view deserves to be heard, whether it’s through protest or voting.”

Even those who do not necessarily participate in student-led activism may believe that it could be important to the UNCG community. Tatianna Wilkins, a psychology student, has also chosen not to participate in any protests or marches but thinks that student involvement in them helps make UNCG a “real-world environment.”

“I know we had the walkout here at school where people took that as a chance to show awareness,” said Wilkins. “It’s one of those things where it may not change anything, but it shows that we are actually trying to do something about it, which I always respect.”

No matter the stance on whether or not to protest, many UNCG students have the same opinions on one thing—what makes a good student activist. Honesty, caring, responsibility and passion were all common answers.

“Somebody that cares, somebody that is not afraid to put themselves out there for the betterment of others,” said theater student Angelo Herrera. “Somebody that truly has a heart and passion for what’s right.”