Day of Defeat for UNCG Volleyball 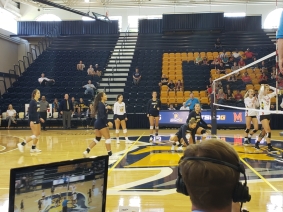 GREENSBORO, N.C – UNCG Volleyball suffered a trying 3-0 defeat to the Maryland Terrapins on Saturday in Fleming Gym. The match was close, and definitely hard-fought for the Spartans.

The game tipped off at 11:00 a.m. with the Spartans coming off of a high from a close win against the US Air Force Academy (3-2 Spartans), and it was visible in the players’ faces.
UNCG could have used this confidence to their advantage, but it soon became obvious to the Spartans that the matchup against the Terrapins would not end the same as their last.

The first game was close, with the Spartans and the Terrapins going point-for-point against one another. There was not much of a rally between the two teams, mostly a serve, a set, a spike, then a point. When the game did get into a rally, however, the notable addition of UNCG’s freshman Anne Schölzel was surely an asset, as she dug more than one difficult spike for the Spartans.

UNCG always seemed to win the rallies with the exception of perhaps one or two later in the match. The first game finished up with the Spartans trailing six points behind the Terrapins’ 25. By this point, it was evident that the two teams were evenly matched, but the difference was in the focus; Maryland stayed focused, whilst the Spartans would occasionally slip up and allow easy spikes for the Maryland offense.

The second game started with a witheringly powerful spike from Maryland’s Rainelle Jones that UNCG had zero chance of replying to. The second game, much like the first, was filled with point-for-point exchanges, with the game remaining at a draw until there was a breakaway streak from the Terrapins.

When the score reached 17-14 UMD, Corey Carlin—the head coach of UNCG Volleyball—called a timeout, and it was obvious that he was pepping up his team. After a short pep-talk, UNCG came back onto the court with a new energy.

That new energy was simply not enough, as the Terrapins had figured out the proverbial chinks in the armor of the Spartans. With a five-point lead, the Terrapins’ morale looked unchanged, and the focus that had got them through the first game was really coming to their advantage in the closing stages of the second game.
The Spartans, however, looked dejected and demoralized. This did not stop valiant efforts from all on the team, and the Spartans scored a further four points on the Terrapins before they reached a 25-18 score.

With the end in sight for the Terrapins, they seemed to slack off in the third game. This provided the Spartans with a significant morale boost, as the smiles and shouted words of encouragement from the sidelines made their splendid return. The Spartans made the first two points of the game against the Terrapins.

Unfortunately for the Spartans, this seemed to sober the Terrapins to the reality that the Spartans were not just going to roll over and let them steamroll the match. The game was hard-fought for both sides, with the Spartans at one point maintaining a four-point lead against Maryland.

At this point, the focus began to slip and the Spartans’ serves failed to land, creating an even playing field for the Terrapins. This did not stop junior Lauren Robeck from loudly encouraging her teammates both on and off the court to keep pushing through.
Evidently heeding her words, the Spartans kept up a fierce and unrelenting resistance to Maryland which did not waiver until the final buzzer. Unfortunately, the final buzzer came from a Maryland spike that landed squarely in the middle of the Spartans. No one could get to it in time, and the game finished 25-20 in favor of the Terrapins. Maryland won in straight sets.

UNCG traveled to Winston-Salem to take on the Wake Forest Demon Deacons later that day. They won that match in four sets, moving to 2-1 on the young season. They next take on the North Carolina Tar Heels in Chapel Hill on Aug. 31.