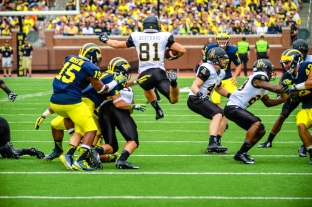 Appalachian State was so close.

They marched into Penn State’s Beaver Stadium—the second-largest football stadium in the world—and gave the Playoff-hopeful Nittany Lions all they could handle, eleven years to the day after they defeated Michigan in Michigan Stadium. That defeat is often regarded as the greatest upset in college football history. The Mountaineers twice overcame 14 point deficits to take the lead late in the fourth quarter.

The two teams headed to overtime. Penn State struck first with a short touchdown run, and the Nittany Lions intercepted a would-be game-tying touchdown pass in the end zone. Penn State prevailed in overtime, 45-38. No miracle this time.

Still, Mountaineer fans have to feel good about their team’s performance. They’ll be the Sun Belt favorites this season.

In other North Carolina college football news, NC A&T matched up with East Carolina on Sunday after storms in the area delayed the game by a day. The Aggies came away with a thrilling 28-23 after a game-sealing interception on a last ditch Hail Mary. This is the third straight year that FCS A&T has upset an FBS team.

NC State, led by All-ACC candidate Ryan Finley, had their hands full with FCS James Madison on Saturday afternoon. The Dukes jumped out to an early 7-0 lead thanks to a short touchdown pass from Pitt transfer Ben DiNucci. For a Wolfpack team that many labeled a dark horse for the ACC crown, it was not the start to the season that fans wanted.

The Pack recovered, though, thanks to a 17-point second quarter. The Dukes crawled back into it on behalf of a pair of chip shot field goals, and trailed 17-13 midway through the fourth. NC State and Finley, however, would not be denied. After leading the Pack down the length of the field, running back Reggie Gallaspy scampered into the end zone with just over a minute to play to put the game out of reach for the Dukes. The Pack moved on, 24-13. They’ll need to tighten up their game if they hope to remain competitive atop the ACC this season.

The UNC Tar Heels were also in action last weekend, traveling to Berkeley to take on the Cal Golden Bears. It was a frustrating afternoon for the Heels, who secured only one first down and coughed up three turnovers in the first half. Starting quarterback Nathan Elliot had an abysmal day, going 15-35 for 137 yards, one touchdown and four interceptions, one of which was returned for a touchdown.

Still, the Heels overcame a 17-point halftime deficit to get within striking distance late in the fourth. Down by a touchdown, they attempted an onside kick and recovered, only to have it wiped out by a controversial penalty. Cal escaped with the win, 24-17.

On Friday, the Duke Blue Devils took on the Army Knights in Durham. Duke won by 20, 34-14, and never trailed, opening up a commanding 17-0 lead at halftime. Blue Devils quarterback Daniel Jones rushed for a touchdown and threw for another. That touchdown pass, with the Blue Devils up by ten points early in the fourth quarter, proved to be the dagger for the Knights, who limped back to West Point with an 0-1 record.

Like Loading...
‹ 19 Non-Citizens in N.C. Charged with Illegal Registering and Voting
The Great DuBois’: Masters of Variety ›