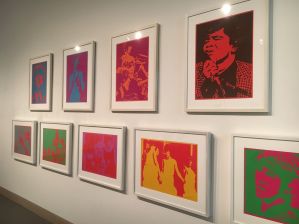 The Weatherspoon Art Museum is currently displaying a variety of works from the 1960s in an extensive exhibit they’re calling “A Survey of the Decade.” The exhibit is aptly named for its thorough spans of the ten-year period.

The exhibit has been compiled from the museum’s personal collection in correspondence with the university-wide initiative “1960s: Exploring the Limits.”

Organized by the museum’s Curator of Collections, Elaine D. Gustafson, the exhibit gives a glimpse into the era’s music, social and cultural standing, leisurely enjoyment and even abstract tendencies through the diverse collection of works housed in the space. Visitors are prompted to nostalgically relive their glory days, or learn about the artistry before their times. No matter the visitor, the exhibit is designed for patrons to enjoy themselves, and to learn a thing or two above all.

Providing a glimpse into the notions of vanity and high value of appearance in 1966, Larry Rivers’ (1923-2002) “Tanfastic” is a time-stamped collage that displays beauty products from the ‘60s such as “skin whitener” and “darker skin tanning oil.” This subtle social commentary also serves as a point of reference for societal growth and the degree to which we as a country have done away with or held onto certain ideals and standards.

Malcolm Morley’s (1931-2018) relaxed “Beach Scene” from 1969 features a family, strongly resembling the stereotypical fashion-forward ‘60s family, enjoying a leisurely day at Daytona Beach. As two children and two parents play on the beach among scattered toys and beach paraphernalia, the work paints the picture of an ideal summer day in the ‘60s.

The exhibit also features a collection of Robert Stanley’s (1932-1997) music icon depictions from 1965, which includes 11 portraits of musical institutions such as The Beatles, The Rolling Stones, The Beach Boys, James Brown and more.  Commanding the attention of the room, the wall of works provides a snapshot of ‘60s greats all in one place.

One of the most well-known works displayed in the exhibit is Andy Warhol’s (1928-1987) “Liz” from 1965, whose vibrancy and preceding reputation speak for themselves in the pieces relevance to this era.

The exhibit works through the decade and sheds light on the multifaceted nature of the era, from casual day-to-day activities to social commentary to abstract works that reveal a free flowing and unrestrained element of the time period. This display has also prompted the greater Greensboro community to embrace the ‘60s initiative as well, as evidenced by UNCG professor Melinda Waegerle.

Professor Waegerle teaches a weekly children’s dance class through a school-sponsored community dance program called Dancers Connect. In her class, Waegerle plans to incorporate ‘60s dances and music chronologically to educate her young students on the influence and importance of this era.

Beginning with the twist- the dance that began to break racial barriers- students will dive into the “big picture” importance of this decade. Waegerle noted that at the conclusion of the dance season, after working through the ‘60s from start to finish, the class will end on the 1969 song “Everyday People” by Sly and the Family Stone.

“The song is about everyone, no matter who they are, coming together. I can’t think of a better message to leave these young dancers with,” Waegerle says.

At some point in the semester, Waegerle will also be taking the students to view the exhibit and dance the decade-specific movements they have learned in the space, amidst the artwork. This total immersion paired with music from the ‘60s will solidify the impact of this time for the students and paint a cohesive picture of a time that they might not have experienced and explored so thoroughly had it not been for this opportunity.

This exhibit is generating value for the Greensboro area on more than one plane. By promoting an anniversary that the university has selected, alumni, current students, faculty, children and community families are being united in this single exhibit.

Whether coming to see “Liz” by Andy Warhol, “Models in The Studio” by Phillip Pearlstein (b. 1924) or works by other artists such as Raymond Parker (1922-1990), there is no shortage of unique creative and historical exposure to be gathered at the Weatherspoon this semester!

Like Loading...
‹ Spartans Get Involved in Annual North Carolina Folk Festival
The 20 Year Anniversary of ‘The Miseducation of Lauryn Hill’ ›