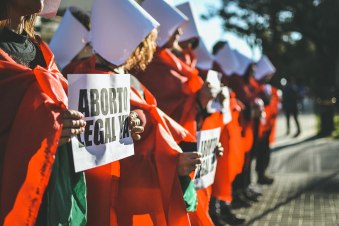 From letters to congress to mass protests in the capital, people have found almost every way imaginable to dissent from the government and bring attention to their cause. Now, the world sees a growing use of metaphorical protests, similar to the one which stood in opposition of the swearing in of Supreme Court nominee Brett Kavanaugh. On September 14, Kavanaugh entered the Senate building to a wave of protesters dressed in identical scarlet cloaks and oversized bonnets lining the balcony, looking down on him in cold silence. The uniform is the one worny by female characters in the hit Hulu series “The Handmaid’s Tale,” based on the novel by Margaret Atwood. The goal of these protestors is to draw a chilling comparison between the dystopian society in the novel, and ours today.

For those unfamiliar with the show, “The Handmaid’s Tale” is the story of a woman named Offred, who lives in a near-future dystopian society. After years of chemical spills and pollution, fertility in women has drastically dropped. The consequence is a plummeting population in the country, and a new demand for surrogates to carry the next generation. A coup by the military is established, which treats women like cattle. The journey follows Offreed’s attempt to escape the system and find her daughter, who was separated from her when they tried to flee the country.

On Tuesday, 15 protestors donned the same uniform as the women who were forced into sexual servitude in the novel. Standing silently on the balcony, they channeled the dark themes of the novel. The women likely sought to convey concerns about women’s rights in the U.S., drawing parallels between our society and that of the book. The protest, organized by liberal advocacy group, Demand Justice, is however not the first to use the attire in metaphorical protest.

Around the world, feminist organizations have been using the popularity of “The Handmaid’s Tale” to bring attention to gender inequality, reproductive rights and sexual violence against women. One of the first protests to don the scarlet cloak and bonnet were those in the pro-choice protests in northern Ireland to overturn the country’s abortion ban. Since then, the uniform has been seen in protests in the U.S., U.K., Argentina and several other countries.

While the style of protest has quickly become popular, some question whether it is effective. In the case of the protest against Brett Kavanaugh, the message is highly reliant upon several factors. The first and most important aspect being prior knowledge of the association of the attire. If an onlooker isn’t familiar with the show or book then the message is largely lost upon them. To them, they are simply people wearing costumes.

The second is the silence. The actual rhetoric informing lawmakers and the general public of your desires for change is crucial. Even if the audience understands the costume reference, they don’t know what specifically the protestors want to change. Some may argue that understanding of the show’s meaning will explain the silent demands of the protestors, but my response to that is this: when the message of the protest is left up to interpretation, you will often get those who misinterpret it. In a slightly more dark prospect, protests without a clear message can be blamed for having a more menacing message than intended. The strawman tactic could easily victimize such groups.

In theory, the usage of metaphorical protests like “The Handmaid’s Tale” can be effectively utilized under certain conditions. Using a widely-known and well-respected narrative as a symbol of protest can draw the nation’s or even the world’s attention. That attention can then be directed to the actual platform of the protests with rhetoric, which will then start the crucial transition from awareness to action. Making sure that all aspects of your argument are known and not misconstrued is a vital part of this approach. When performed effectively, this form of protest can be a powerful influence in public debate.