Home › Arts & Entertainment › “And Then There Were None” Review

“And Then There Were None” Review 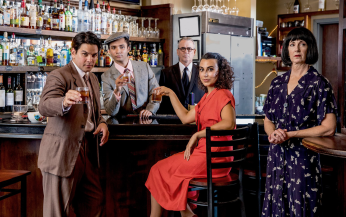 From the moment the lights dim and the eerie gauze curtains are pulled back, there is no question that And Then There Were None is a melodramatic masterpiece full of mystery and suspense. Triad Stage, the professional theatre company located in downtown Greensboro, recently kicked off its 18th season with Agatha Christie’s best-selling murder mystery, And Then There Were None, and you do not want to miss it.

Artistic Director Preston Lane says it best by saying, “The terrifying chills of a great whodunit sends shivers up our spine and makes us wonder who is sitting beside us.” Maybe it’s the island-induced feeling of isolation or the ambiguity of each uniquely suspicious character, but as soon as the curtains are drawn, you won’t be able to look away.

The play opens as ten strangers arrive on an island, each expecting to be greeted by a strange Mr. Owens. As the night progresses, the guests begin to realize that their host is not who he claimed to be and their pleasant weekend away turns into a mysterious massacre that leaves us all waiting for the answers. To make matters worse, all of these killings are taking place on an island on which there are no other inhabitants, or so they think. One by one, each of the ten guests begin to die and it becomes a race against the clock to uncover the person responsible for the murders in order to save the lives of those who remain. The first act sets the scene, introduces each of the characters, and leads straight into the action packed second act marked by the death of the first guest. Act two is packed with accusations, uncertainty, and the ultimate “whodunit” scenario. Catastrophe like no other strikes in the third act and the show concludes with a tragic twist that you have to see to believe.

The suspenseful plot, sophisticated script and talented cast would be more than enough to create a suspensful and exciting experience for the patrons. However, scenic designer, Robin Vest took it to the next level and created a set which protrudes directly into the center of the audience, creating the illusion that the audience is part of the story.

Each actor is worthy of recognition, but standouts include Mari Vial-Golden, playing Vera Claythorne, and Renaldy Smith, playing Phillip Lombard. Both of these actors are undeniably talented, and transformed into their characters beautifully and transparently.

Another element of And Then There Were None that adds to the overall success of the show, in addition to the talented cast and intense soundtrack, is the classic 1930’s costuming. If the furnishing of the set and the language used throughout the script were not enough to make you feel like you just stepped out of a time machine, the work of costume designer Bill Brewer was the finishing touch.

All of these components came together to create a captivating murder mystery masterpiece that will leave you on the edge of your seat. And Then There Were None is a must-see mystery that will leave you hungry for a sequel. This bestselling production has been performed all over the world, however I guarantee you won’t find anything quite like Triad Stage’s rendition. Perhaps the most thrilling mystery of all is how a small theatre in the quaint city of Greensboro can produce something so magical.

Like Loading...
‹ CTG’s Show Newsies is a Fun Time at the Theater
A Post-Hardcore Throwback: Blessthefall at The Blind Tiger ›

Tags: And Then There Were None, Arts & Entertainment, Play, Theater, Triad Stage