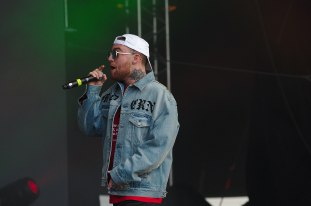 On September 7, 2018, rapper Mac Miller died at the age of 26 because of an alleged drug overdose. Many of his fans and artists that were close with him took to social media to express their condolences and grief. However, there were some fans that took to the internet to blame Ariana Grande for his death.

Grande and Miller were in a relationship from 2016 to May of 2018. Many of the comments on her Instagram claimed she was the cause of his death, which later led to her disabling comments altogether.

The notion that his ex-girlfriend is to blame for Mac Miller’s death is absurd. Miller was his own person, and she was never responsible for him. Shortly after their breakup, he was arrested for driving under the influence. Someone on Twitter blamed Grande for being the cause of his actions.

Ariana responded in a Twitter statement saying, “How absurd that you minimize female self-respect and self-worth by saying someone should stay in a toxic relationship. Shaming or blaming a woman for a man’s inability to keep his shit together is a very major problem.”

By blaming her for Miller’s death, it insinuates that she was responsible for an issue that was completely out of her control, which is not realistic. I think that by doing this, it can make someone blame themselves more than he or she probably does. How can society deviate from the notion that women are responsible for a man’s behavior after a relationship?

I think it’s easy for society to blame a woman for a man’s actions, because men are often not held accountable for their actions. As women, we are constantly told that we should stay in a relationship even though it is toxic. To stay in a relationship, there should be a level of respect that is non-negotiable. Mental health is incredibly important, and props to Ariana Grande for standing up for herself and showing other women that they don’t need to stay in a toxic relationship to please others or to experience love.

On Twitter, Grande expressed how difficult it was to witness Miller go through a battle with addiction. With Miller’s fans saying that Grande was responsible for his death, it further increases the notion that she was needed to control his actions. Grande wasn’t responsible for any of his behavior, and to say that she was is cruel. Miller’s battle with abuse did not begin after the breakup. This struggle went on for years before, which a lot of people either don’t know or seem to have forgotten. Many people think that by being in a relationship, a person can change but that’s often not the case. Those battles are personal. It takes more than one person to change the actions of another.

Grande has also expressed that throughout their relationship, Miller was not sober. If they had stayed together would he have eventually gotten sober? Most likely not. This was a battle that Miller was dealing with well before they were together. He probably would not support the hate she is currently receiving. The two were on good terms after their breakup, and there was never any negativity expressed, especially when asked about each other publicly.

On her engagement with SNL star Pete Davidson, the rapper said, “It’s just a part of something that’s going to continue to help make me who I am. It’s all positive energy. I am happy for her in moving forward with her life, just as I’m sure she is with me.”

This shouldn’t give fans any reason to fault her for his death. Ariana Grande should have been met with kindness and sympathy instead of negativity. She is also dealing with a loss, one that she had absolutely no part in.