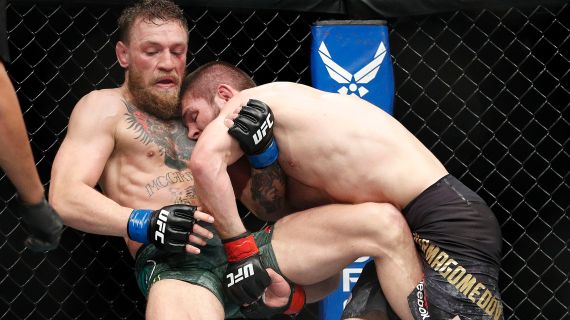 Two weekends ago, things were chaotic in the world of UFC. The ever-controversial Conor McGregor faced off against his Russian opponent, Khabib Nurmagomedov. This particular fight arc was a whirlwind, from all the events leading up to it- from the actual fight to the skirmish that commenced soon after the actual fight had ended.

One of the main comments that started to instigate emotions between McGregor and Khabib was when, in 2016, Conor’s trainer, John Kavanagh, commented on Nurmagomedov’s Muslim faith. At this time, Khabib was planning other fights with other competitors in his weight class. He had just challenged fellow fighter Rafael dos Anjos to “a rematch but said summer was out of the question while he observed Ramadan as part of his Muslim faith,” as quoted from Brian Campbell of CBS Sports.

Clearly, McGregor’s trainer saw this as something to poke at, so he hopped on Twitter to make a stupid and insensitive remark about it, which caused tension between the two fighters.

The next major pre-fight confrontation between the two men was on April 5, 2018. It was just a couple days before UFC 223 was supposed to commence between Nurmagomedov and Al Iaquinta. McGregor and a herd of his goonies rushed into the Barclays Center where fellow UFC fighters were staying. McGregor destroyed a bus window using a dolly in a bout of anger specifically aimed towards Nurmagomedov. Some of the broken window actually injured other fighters in the process. Considering all that happened, all that Nurmagomedov had to say about the clash was “just tell me where, where, and that’s it,” in regards to facing McGregor. Clearly, Nurmagomedov was ready to fight, as was McGregor.

A few days after the bus incident, Nurmagomedov captured the UFC Lightweight Championship after beating Iaquinta. With a match surely in both his and McGregor’s future, tensions escalated even higher. McGregor pled guilty to charges against him because of the bus fight and had to settle for a light plea deal.

Sept. 20 was the duo’s first press conference together, and even though no punches were thrown, there were obvious tensions which included McGregor telling Khabib that he would’ve killed him had he stepped off that bus. It was not a pretty press conference and was certainly a precursor to how the fight would go.

Finally, the fight was upon us. It was as crazy as expected in Vegas. Nurmagomedov ended up pulling out the victory after a fourth-round submission. McGregor ended up tapping out to take the loss because of the victorious chokehold by Nurmagomedov.

Fights ensued soon after the actual event ended. Both teams of the fighters began to fight in the Octagon, which then spilled outside. Fans hurdled the barricades to attempt to get involved in the fight, which had to be broken up and corralled by police.

Inside the cage was no better. Nurmagomedov “got into a shouting match with UFC president Dana White during the altercation inside the cage,” according to Campbell. He took his opportunity to literally tower over McGregor and potentially spit on him. Then, Nurmagomedov climbed over the cage walls in order to try and attack McGregor’s friend and fellow fighter, Dillon Danis.

Back in the cage, “three members of Nurmagomedov’s team attacked McGregor, sending the entire T-Mobile Arena into a frenzy, the likes of which mixed martial arts has never seen before,” according to Campbell. McGregor could not catch a break.

Many punches and kicks were thrown in this fight. Round two was Nurmagomedov’s strongest round. McGregor managed to survive and still talk trash for a round and a little more, which he was praised for in regard to his toughness, but ultimately he still suffered the loss.

It was a crazy night for UFC, and it raked in a ton of money for the organization. Look forward to more interesting and dramatic matchups in the near future.

Like Loading...
‹ Shakori Hills: A Celebration of the Weird and Wonderful
What All Did We Learn from the NBA Preseason? ›