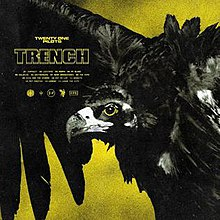 The album was produced by Fueled By Ramen, and was released on October 5th. Trench’s roots began shortly after the Emotional Roadshow World Tour in 2017. There is a lot of hidden meaning in the purpose and message of the album, which the pair has slowly alluded to in varying interviews and social media posts.  The style of the album is quite different from its counterpart, “Blurryface,” allowing for the listener to follow the storyline of the album and listen to a new sound coming from the band.

Beginning with the song “Jumpsuit,” the album starts on an upbeat note. The intro is bass heavy, then tapers off into a simple beat in the background. By the end of the song, the listener can tell that the song is most definitely a creation of Tyler Joseph and Josh Dun, but it still feels different somehow.

Instrumental breaks are a recurring stylistic choice for the songs in “Trench,” which is new for the band. The next song is “Levitate,” which shows off Joseph’s rapping skills. Twenty-One Pilots commonly emphasizes creative and new-age lyricism, and throughout the beginning of the album this shows. The first three songs are rather upbeat and poppy, but this does not continue further into the album.

“My Blood,” the fourth song on the album, begins slower, then picks up more towards the middle of the piece. After listening to “My Blood,” and “Chlorine,” the fifth song of the album, the listener can begin to see a theme between the lyrics of each song. According to an article by Billboard, “Twenty One Pilots’ ‘Trench’: Decoding the Clues They’ve Left About Their New Album,” the album is about Blurryface’s counterpart, Clancy.

“[Clancy’s] journal entries chronicle his attempts to escape DEMA with a group he calls the Banditos, and ends with a letter explaining how DEMA felt like home after being there for so long, but he’ll never see it the same after escaping it,” wrote Billboard. For the 2015 release of “Blurryface,” Blurryface was a character that embodied many of Joseph’s insecurities and problems. Clancy, too, has issues of his own, and comes across to the listener as being depression-ridden and slightly suicidal.

This is evident in the song “Chlorine,” for example. The song begins with Joseph singing “Sippin’ on straight chlorine, let the vibe slide over me, This beat is a chemical, beat is a chemical.” Chlorine is deadly when ingested straight on, or at minimum can cause extreme bodily damage. However, chlorine also is a stellar disinfectant. Knowing this, Clancy could be suicidal, thinking that the end of his existence will clean up the existence of others.

Twenty-One Pilots have been criticized throughout the years for having darker music, which is brought up in the song “Nico and the Niners,” song nine on the album. “‘Nico and the Niners’ seems to take a direct shot at that with lyrics such as, “maybe from all the money we made razorblade stores, rent a race horse and force a sponsor,’” says Billboard. At the beginning of Nico and the Niners’, Dun chants “We are banditos, we will leave DEMA and head true east, we renounce vialism”. This is a hopeful harbinger for brighter and more positive lyrics in the future.

Continuing into the last five songs of the album, a new chapter of the album begins, with calmer and “beachier” melodies. “Nico and the Niners” and “Cut My Lip” both are slower and more spacey in production. Clancy seems to be getting better as a character, coming out of his depressive tendencies and cycles. He still seems slightly dazed, but by Pet Cheetah, he seems to be more aware of his life. The chorus of Pet Cheetah states: “No, I move slow. I want to stop time, I’ll sit here ‘till I find the problem”, possibly suggesting that he is actively looking for a cure to his mental health. “Legend,” song 13 on the album, is more upbeat and positive. The song ends with Clancy wanting to get lunch with the person he is singing to.

The outro, Leave the City, is a rather sobering and somber song, especially compared to Legend. The lyric “They know that it’s almost, they know that it’s almost over” can mean a couple different things. First, being that the album is nearly over, but secondly, that the depression and darkness of life is something that will pass someday soon. Clancy is finally leaving the comforts of his depression and circumstances to become a better person and pursue his dreams.

Trench overall seems like an album that is not only hard to sift through, but also deals with important matters such as mental health. It is a heavy album, and recognizes Twenty-One Pilots issues and criticisms, but all in all seems to be the beginning of a new era. This album was composed with a specific purpose, that can be seen by both casual listeners and intent fans alike. Trench is the beginning of a new musical era for Twenty-One Pilots.

Like Loading...
‹ Bad Times at the El Royale: Weirder Than You Think, Better Than You Expect
Millennial Memento Mori ›