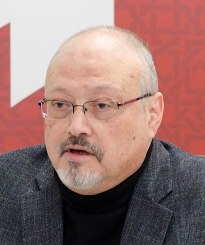 After news broke of the death of a prominent Saudi Arabian journalist mid-October, many turned to President Donald Trump to condemn the actions of the Saudi Arabian government, who many believe killed the journalist. Instead,  Trump said that he sees Saudi Arabia’s explanation of journalist Jamal Khashoggi’s death as, “credible.”

The Saudi Arabian government claims that Khashoggi’s death was an accident that occurred during a fist fight, but the majority of United States intelligence believes that he was murdered under orders of the Saudi royal court.

Trump, as part of his foreign relations strategy in the Middle East, has made an effort to be in good standing with Saudi Arabia’s Crown Prince, Mohammed bin Salman. Saudi Arabia was the first country Trump visited during his presidency.

Prince bin Salman has been linked to Saudi operatives who were in the same city as Khashoggi, claiming that the journalist went missing. Despite this evidence, when Trump was asked if he saw the Saudi government’s explanation of Khashoggi’s death as credible, he responded, “I do.”

Trump may not be completely on board with this explanation, however, since he said that he still has questions for Prince bin Salman. He also mentioned the possibility of putting sanctions on Saudi Arabia in light of the incident, but does not want to disrupt the sale of billions of dollars worth of weapons between Saudi Arabia and the United States.

Republicans and Democrats alike in Congress are very skeptical of the Saudi explanation for Khashoggi’s death. The general consensus is that what is known about the incident does not match up with the government’s statements on it.

“The kingdom and all involved in this brutal murder must be held accountable, and if the Trump administration will not take the lead, Congress must,” said Representative Adam B. Schiff, the senior Democrat on the House Intelligence Committee. Lindsey Graham (R-SC) who is very supportive of President Trump, also expressed his concern on the issue.

“To say that I am skeptical of the new Saudi narrative about Mr. Khashoggi is an understatement,” said Graham in a tweet. “It’s hard to find this latest ‘explanation’ as credible.”

Khashoggi served as a journalist for The Washington Post. Prince bin Salman and Saudi officials have denied any involvement in his death, but they gave a statement confirming his death, which President Trump called a “good first step.”

Saudi Arabia has been an important yet problematic ally to the United States for years. A stable relationship between the two countries has been important for aid in conflicts with other Middle Eastern countries like Iran, but Saudi Arabia’s government has engaged in excessive violence and human rights abuses that cannot be ignored.

Trump’s senior advisor and son-in-law, Jared Kushner, has also developed a relationship with Prince bin Salman and has advised the president to continue maintaining a good standing with him. As more details about the grotesque murder and dismemberment of Khashoggi are revealed, though, fewer officials can stand with Trump and Kushner in their support of the Saudi Arabian government.

In an interview with the New York Times, the president said that this incident has become the largest foreign policy crisis so far in his presidency.

“This one has caught the imagination of the world, unfortunately,” said Trump. “It’s not a positive. Not a positive.”

In the same interview, Trump said that it is still too early to know for certain under what circumstances Khashoggi was killed, but he believed that the truth will be revealed soon.

“We’re working with the intelligence from numerous countries,” said Trump. “This is the best intelligence we could have.”