Janitors Are Our Invisible Heroes 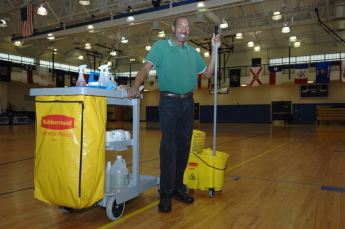 Those who keep the spaces we occupy clean and functioning are incredibly important. Schools, offices and hospitals and other public places obviously don’t clean themselves. The people who take on this dirty job are janitors and their work should never go unnoticed, but often does. A common narrative around janitors is that their jobs are deemed unimportant. Because of this, their work isn’t acknowledged in the way that it should be.

A person’s work is theirs and deserves to be recognized. Even though it may not be “conventional,” it’s still a job. But why are janitorial jobs considered “unconventional” in the first place? I think that they have been deemed this in society because there is the connotation that cleaning up after others isn’t a job worthy of acknowledgment. However, there’s more to a janitorial job than cleaning up after someone. Without janitors, facilities wouldn’t be able to operate in the ways that they are supposed to on an everyday basis.

In a video by DUDEbenice on YouTube, students trick their custodian Rocky to surprise and thank him for his service. At Los Primeros School of Sciences and Arts in Camarillo, California, the students give their own personal narratives about how he has helped them. They have nothing but positive things to say and want to do something nice to show their appreciation.

One student notes that “he treats us as his family.” Rocky has been at the school for 33 years and in the video, he states, “My purpose is to help people be happy because we’re all one family.” The students surprise for him includes getting his favorite candy and a San Francisco 49ers football player there to show their appreciation. A person, especially one like Rocky who has been a janitor at the school for 33 years, deserves to be recognized for their work. Thanking those who do work like this should not be a once in a while practice. It should be done as often as possible, because appreciation can go a long way for someone.

In another video, Tennessee students at Hickory Elementary School decided to use sign language to sign “happy birthday” to their deaf custodian, which brought him to tears. The school custodian, Mr. James, has been a custodian at Hickory Elementary school for 15 years. Mr. James said, “You have to be able to know what it’s like to live and not be able to hear real good, but to see those children do that, it was just wonderful.”

Also, according to the video, the students collectively said that they wanted to give back to Mr. James who has given them so much. This video was incredibly heart-warming.

Showing your appreciation for custodians is important and should be done without hesitation. Their jobs are as important as everyone else’s, and deserve to be recognized regardless. Custodians should be treated with the same level of respect as people who have other jobs that are deemed as  higher up in the hierarchical job ladder.

The work that janitors do is to serve others. If we didn’t have them, the everyday spaces we find ourselves in would be dirty. I’m sure that most people wouldn’t want to be in those spaces if they were. Spaces require their facilities to be clean to provide the best service and care for those in them. Janitors are critical for the functioning of a workplace or any space. To show our appreciation for the work they do every day, we can start by saying thank you. This goes a long way and is necessary. Do something special for them every once in a while, just like we do for our peers. No one should be looked down upon because of the type of job they have and if it doesn’t meet your standards of what their job should be.