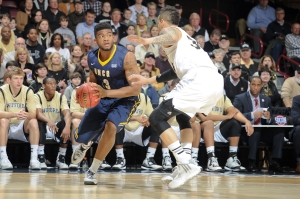 This Saturday, the Men’s Basketball team will open up their 2015-16 with an exhibition game against Greensboro College at the Fleming Gym. The team is coming off a 2014-15 season that saw them go a subpar 6-12 against SoCon (Southern Conference) opponents and 11-22 overall. This troublesome record placed the team second to last in the conference a season ago.
However, the team did end the season with a first round victory in the SoCon Tournament against Samford before falling to the eventually champions Wofford Terriers. Coming into the season, the Spartans will look to carry last season’s late momentum into the new year, the final year for senior forward, Kayel Locke.

Since his freshman year, Locke has been an everyday player for the Blue and Gold. That year, Locke played in all 31 games played, with 17 starts. He finished third on the team in points with 9.9 per game and rebounds with 4.4 rebounds per game. The season also saw Locke set a career high in free throws made with 14 against NC A&T, as well as 17 points in his first game, the most by a Spartan since Kyle Hines in 2004.

His sophomore season saw Locke start all but one game and set career highs in field goal percentage (.463), free throw percentage (.743), and three point percentage (.227). Against Claflin, Locke set a career high with 25 points and had a streak of consecutive free throws made throughout February. Last year, Locke continued to improve his impressive Spartans career by becoming the 20th player in the university’s history to reach 1,000 career points. Locke also was able to set career highs in field goals made (158), total rebounds (189), total points (415) and points and rebounds per game (12.6 ppg and 5.7 rpg).

Now, as a senior, Kayel looks to have his best season as a Spartan. Knowing how much the time has meant to him since his freshman year, Locke is both joyful and sad to be playing his last season for the Spartans.

“ A lot of me is very excited for the season and a lot of me has a bittersweet feeling, seeing that it is my final year” Locke said. “It is definitely a swing of emotions. I just want to do right by my team and be able to bring a championship to UNCG.”

According to the SoCon media poll, the Spartans were predicted to finish in ninth this season out of ten teams. The coaches poll had them in sixth. Despite these polls, UNCG is one of only two teams with multiple players on the coaches Preseason ALL-Conference team with Locke and junior guard Tevon Saddler. With the preseason projections, Locke was uninterested in the predictions, as he already knows what he would like for the team to do this season.

“Our biggest goal is to win the SoCon championship. I do not really feed into the preseason rankings, though I am honored to be a part of the preseason All-SoCon team, along with Tevon” Locke said. “But at the end of the day preseason stuff does not mean that much.”

“With having the core of our group back this year and regardless of our preseason rankings, we have enough talent, drive, and determination to win the SoCon championship.”

For the second time of his career as a Spartan, Kayel spent part of the off-season traveling in Europe competing against other countries to prepare and improve for the season. This summer, Locke played in the Global Sport Academy Goodwill Tour for an eleven man team. The team traveled to Belgium, Germany, England, and the Netherlands and Locked shared with what he learned while abroad.

“It was a great, eye opening experience to play against professional teams overseas” Locke said. “You aspire to play professionally and being able to make connections with different teams, scouts, and coaches was a great experience” he said about the trip.

Aware that his time at UNCG is short, Locke Locke discussed possible options in the future once he leaves in May.

“I am going to graduate with a business administration degree. My father was into marketing and a coach, so those are two areas I am interested in” Locke said. “I want to pursue my a professional career, rather it be overseas, in the states, or the NBA and I believe I have the tools and connections to be able to do that.”