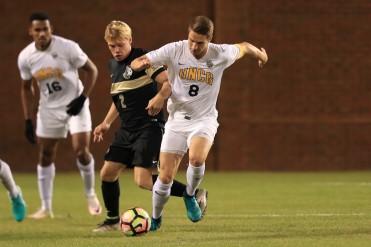 UNCG Spartan soccer is in their beginning stages of the season. Last season the women went 7-11-2 and 4-4-1 in Southern Conference play as the men went 11-7-2 and 6-4-0 in SoCon matchups.

The men have some good players returning this season too. Leeroy Maguraushe started 17 games and was named to the First Team All-Southern Conference. His six assists were tied for second most on the team, along with junior midfielder Matteo Busio. Another impressive player from last year was Eric Gunnarsson, who started and played in 15 games and was named to the Second Team All-Southern Conference. He had four goals last season, with three of them coming in the last three games of the year against VMI, Furman and ETSU.

The men have an interesting non-conference schedule this year. Their first exhibition game will be played at Elon on Friday, August 18. There are some interesting matchups against other North Carolina schools like High Point, UNC Asheville and Appalachian State. All of these games will be played at the UNCG Soccer Stadium. The highlight of the non-conference schedule will definitely be when the Spartans take on the University of North Carolina Tarheels. The game will take place on Monday, September 4 at 7 p.m. at the UNCG Soccer Stadium.

SoCon games should also be competitive for the men, who placed 4th in the regular season standings last year behind ETSU, Mercer and Wofford. Homecoming and Senior Night will be on Saturday, October 21 at the UNCG Soccer Stadium against Mercer at 7:00 p.m. The SoCon tourney starts Saturday, November 4.

As for returning players, some of the standouts include our goalkeeper Chloe Buehler, who is a redshirt senior this year. Last year Chloe was named to the Second Team All-Southern Conference. She started all 20 games last year in goal with 104 saves and six shutout games. Another strong player for the Spartans is Melanie Spensiero, who is a junior. She started all 20 games of the season and led the team with five goals, three of those goals being game winners against Elon, Army and Western Carolina respectively.

Their first exhibition game for the ladies was played Saturday, August 12 against Campbell at the UNCG Soccer Stadium. The Spartans got the victory 2-1 thanks to strong defensive showings by our goalkeepers Chloe Buehler and Aiyanah Tyler-Cooper. Offensively, the Spartans got goals from freshman Isabel Pearce and junior Caylin Prillaman.

As for non-conference matchups the season, the girls start their season at Florida State on Friday, August 18. Other interesting matchups include games at home against Clemson and one of our rivals, Elon. The Clemson game will be on Sunday, August 27 at 6:00 p.m. Like the men, the ladies also play against High Point and Appalachian State.

Conference play kicks off on Friday, September 22 at Wofford at 7:00 p.m. The women are looking to be more competitive this season in conference play, as last season they placed 5th behind Samford, ETSU, Furman and Mercer. The last game of the season will be against The Citadel at the UNCG Soccer Stadium at 2:00 p.m. on Sunday, October 22. The SoCon tourney starts Saturday, October 28.

All-in-all, it’s looking to be an exciting season for both teams. With all the returning and new talent that both will have, it’ll be a fun and competitive season. There will be some important games all season long and it’ll be intriguing to see how the Spartans do.