The Gay and Wondrous Life of Caleb Gallo 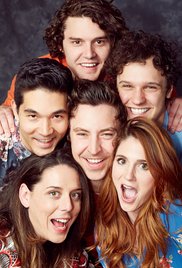 There have been a variety of shows with a focus on gay life on network television. More recently, Netflix creations have competed with these programs, but nothing has cut quite to the core of young gay audiences as the five-episode Youtube series: “The Gay and Wondrous Life of Caleb Gallo.”

Starring and created by Brian Jordan Alvarez, Alvarez plays the romantically confused and sexually loose gay man, Caleb Gallo, as he navigates the various platonic, romantic and sexual feelings he has for his straight friend Billy, and his long-distance-boyfriend, Benicio.

The show could best be described as a gay adaptation of Shakespeare’s classic, “A Midsummer Night’s dream,” as everyone is falling in love and having sex with the wrong person, and this is much of the crux of the show’s comedy. Every character is defined almost entirely by whom and how many people they are attracted to, and what makes the show interesting is the fact that every character seems to be a little in love with or attracted to each other. The effect is a sort of self-aware fluidity and bizarre humor that feels like an almost unrealistic and hedonistic take on romantic and sexual gay life, were it not also a somewhat realistic take on how often it can be confusing for gay people to neatly differentiate the romantic from the platonic feelings and relationships they have with their friends.

While the show centrally focuses on Gallo’s love life, the show’s breakout star is Jason Greene’s Freckle. A transgender actor, Greene described much of It’s approach to the feminine Freckle as drawn from It’s real life experiences. “A lot of the scene work is scripted… but they’re pretty much based in real life. That was my apartment we shot in, I was lounging around in furs and silks for a year because I had come into some money and didn’t have a job… Everything you see in those scenes is like Freckle, but I was performing around Silver Lake in bars,” said Greene to Myles Tanzer in an interview with Fader Magazine.

While the series debuted in 2016, it is Freckle that catapulted the show back into the social media spotlight with a myriad of memorable phrases-turned-memes, such as: “Sometimes… things that are expensive… are worse,” “I’m on six beta blockers and a large iced coffee. I have no idea what I’m here for” and the famous closing line of the series, “I just have one thing to say to all of you beautiful, beautiful people; each and every one of you. Does anyone have any goddamn weed?”

While Freckle’s memorable quips have arguably launched “The Gay and Wondrous Life of Caleb Gallo” back into popularity this year, it is the infamous “throuple,” scene in episode two, that has captivated audiences with its strange and hilarious absurdity.

The scene, beginning at the home of Gallo’s two graduate school class advisors, Panana and Jury, who are a couple, is a whirl of dialogue between the two, Gallo and the couple’s third partner, Mike Wake. “We are in a lesbian-centric semi-non-sexual throuple with us and Mike Wake,” Panana says in a deadpan voice to Gallo, as Wake comes in to offer the three tea. The moment takes on another level of surreal humor as Wake looks eagerly at Gallo and asks, “Were you wondering if I was available to have sex?” To which Gallo responds, “You’re very attractive,” and the two then set a date for dinner and sex.

Dubbed by fans as the “throuple scene,” this unusual sort of tit for tat homoerotic and polyamorous sexuality encapsulates the dynamic humor and sexual fluidity between characters on the show.

Of course, these undefined sexual and romantic roles between characters is also a cause for conflict on the show, as polyamory bleeds into cheating between monogamous characters Gallo and his boyfriend, Benicio. Ultimately, people get hurt. But ironically enough, it is the very adulterous attitude which tears these relationships apart that brings them back together, as Ken Kirby’s character Len says: “we’re all here together because we love each other,” demanding peace between the tangled web of lovers that cross the boundaries from gay and straight, and back again.

And while cheating and polyamory is perhaps not the most advisable way to bring peace to troubled relationships, the uncategorized sexual and romantic intimacy between characters on “The Gay and Wondrous Life of Caleb Gallo,” shined a poignant light on the ways these lines often blur and shift between friends in the LGBT community.