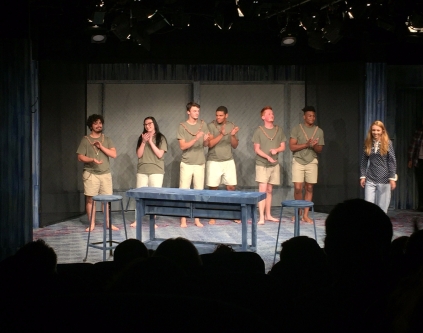 On Thursday, Greensboro College held a production of Caryl Churchill’s “Far Away.” The play depicts a tale of a dystopian society, where all forces of nature are at war with one another. The degree of the dystopia ranged from not knowing “what side [of the war] the stream is on,” to terminating elephants, cats and children under the age of five.

With a total of three main characters and six extras, the focus to dialogue and content was vital in this production. Keeping the play stage to a controlled minimal size also allowed for a stronger emphasis on the circumstance of shelter from war, with the only settings a safe house and a factory workplace.

The abstract exploration of the struggle between societal conflict, survival and fear imposed by the government was both thrilling and thought provoking. The established theme of government, its ability to influence society and even deeper, the everyday lives of individuals, led to the consideration of today’s status of (worldwide) political discord that is a result of factors such as globalization, technology and media, among others.

The two main characters, Joan and Todd, develop a romantic relationship while working at a hat factory that fabricates head pieces for prisoners to wear before being sent to death by the government. The main theme of fear is expressed throughout the play, as Todd explores the idea of exposing the corruption of the industry he works for with the help of a journalist friend. Joan encourages this, being the stronger and more rebellious character of the two. Throughout the play, it became apparent that Joan represents the freedom and liberty that is sought from a functioning democracy without sexism or gender roles.

The visualization of prisoners wearing both chains as well as intricately beautiful hats before being put to their death can easily be associated with the concept of materialism. This is seen as the prisoners’ fulfillment and comfort is sought through material values and tangible aspects, rather than human interaction, emotion or experience.

Another visually shocking moment was that of artistic creativity, where a theatrical screen was implemented to illustrate the war that was going on. This screen only casted the shadow of the actors in front of it, and the audience was only able to see silhouettes.

In this screen, there were actors with animal heads; it was with humans holding weapons and other machinery. Moreover, the abstract representation of corporate or industrial corruption is another factor that can easily be applied to current day corporatism in America, as well as other places in the world.

The fear of being fired, of dying while walking home and of loneliness are all mentioned in one of Joan’s monologues, after she had raged through the streets trying to get home, in the middle of this war.

As strange and abstract as it is, one might consider the relation to the disconnect between societal groups occurring today. From racial tension brought about by the 2016 U.S. presidential elections, to religious discrimination as a result of terrorist attacks, aspects of social discord are expressed in this production through this unified umbrella of nature rather than just human civilization.

One might even say the play is a commentary on the human species, and the extent to which we might be in even more danger if the wars and discord that occur between us were at the scale of nature as a whole, rather than just among humans. This is where the concept of unity and support come into play, especially in the last act as the main actors, Todd, his relative, Harper, and Joan are sheltered in Harper’s house as they endure the war occurring outside their home.

This specific production was able to address crucial and contradictory issues facing today’s governments and societies, with the application of an abstract setting and circumstance. This, in turn, allowed for the audience to engage in deeper thought and reflection, not only regarding themselves as individuals, but about society as a whole.

Though it might be said that the initial reaction to this piece’s imaginative approach towards socio-political divergences is far reached, one may simply look at the title, “Far Away,” and understand that though the ferocity and absurdity of the play may be extreme, with closer analysis, it is not much different from what is going on in the world today.