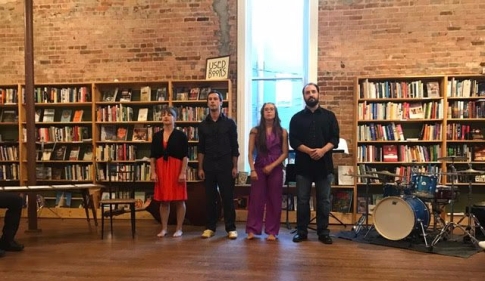 On Thursday, New Music Greensboro kicked off their new concert season with a performance at Scuppernog Bookstore in downtown Greensboro.

New Music Greensboro is the city’s primary presenter of music on the cutting edge, with concerts from UNCG’s own ensembles and students, as well as featured special guests and events. This past concert hosted Collapss, a group which considers themselves to be a multidisciplinary art ensemble.

Collapss stands for “COLLective for hAPpy SoundS” and was founded in 2013 by Laurent Estoppey and Nick Rich, who are both musicians and composers. According to their website, the ensemble aims to focus on collaboration, improvisation and performance in nontraditional locations through their multimedia art.

Thursday’s concert encapsulated this goal. The performance space in the back of the bookstore was definitely nontraditional, and the ensemble members incorporated their surroundings into the show through improvisation.

At the beginning of the show, each person in Collapss would pick up slips of paper from a table, one at a time, which indicated what they were supposed to read from a book they randomly selected from the shelves. What resulted was an aural collage of voices, narratives and words in what they called a “Bedtime Story Improv.” Engaging with the books created a piece of art unique to that night and that physical space.

A highlight of the evening’s program was “Mingus Live in the Underworld,” a piece written for double bass and narration by Frank Proto and John Chenault. Bassist Steve Landis played with intensity, engaging the audience in the developing narrative. Written about American jazz musician Charles Mingus, the piece attempts to capture his sense of being and inherent anger that manifested itself in his playing.

For audience member Jocelyne Caldera, this piece was thought-provoking and exciting. “The experience was new for me, but I found myself really enjoying it,” she said after the show.

In addition to music and spoken word, the evening also featured interpretive dance. Collapss co-founder Laurent Estoppey and UNCG professor Steve Stusek played “You May Bury Me in the East,” a piece written by experimental composer Andrew Weathers especially for them, with interpretive dance accompaniment. UNCG Alumni Brianna Taylor and Emily Aiken danced both separately and together, following the contour and direction of the music.

Collapss ended their show with one of the most intriguing pieces of the night, selections from Christian Asplund’s “Anatomy Series.” While the musicians were playing, dancers Taylor and Aiken engaged with different parts of their bodies, designated by each section of the piece.

Though unnamed to the audience, the interpretive dance made it obvious which body part was in focus. “Mouth” consisted of strange and drastic mouth movements, and during “Hair,” the dancers were playing with and fixing their own and each other’s hair.

“Nose” pushed the boundaries the furthest, with Aiken crawling on the ground and dramatically smelling everyone’s shoes and later putting her fingers in her nose while moving around. Though it may have been far-fetched and too exaggerated for some, the message was unmistakably clear. The performers were engaging with and pushing the audience’s reactions and discomfort, making the piece interesting and memorable.

For a group that focuses on the new and nontraditional, Collapss definitely conveys their message. Undoubtedly unique and unfamiliar to many, their brand of performance art is thought-provoking and pushes the boundaries of what creativity and art can be.

Sharneisha Joyner, an audience member and composer, was inspired by the event. “I think that going to the show was really ‘ear opening’ to me,” she said. With their multimedia art, from dance to poetry to music, and engagement with their surroundings, Collapss gave Joyner a lot of creative food for thought.

“It opened my eyes to just how many tools I have around me to communicate my ideas through music,” Joyner said.

The Greensboro-based ensemble performs in bookstores, businesses and museums, as well as other open and nontraditional spaces. Though this particular concert was more based on music, spoken word and dance, Collapss also engages with video and theater.

The improvisational nature of their performances means that no two shows are the same, and Collapss puts on a show that is very much worth seeing. Their performance art will be like nothing you have seen before and is sure to make you think, as well as open your mind to the new and exciting possibilities in art.

More information about Collapss can be found online, while upcoming concerts and events hosted by New Music Greensboro can be found on UNCG’s College of Visual and Performing Arts website.