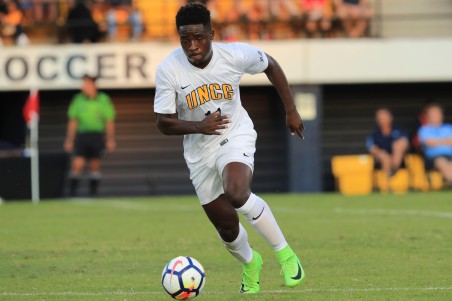 Both the men and women teams played this weekend. The men played Saturday night at Spartan Soccer Stadium against in-state opponent University of North Carolina-Asheville. The women played Sunday afternoon at the stadium against William & Mary.

The men have been struggling thus far this season, entering the match with a 0-5-1 overall record with only two goals scored. However, this game went well for Blue and Gold as they got the win, 2-0, against UNCA. The game started out interesting in the 13th minute when UNCA player Ben Chapel got behind our defense and shot it unsuccessfully from 10 yards out against junior goalie Jon Milligan. The Spartans got their first goal in the 33rd minute off of a corner kick that was taken by Alex Henderson. It bounced around in the box and ended up at the top of the box near midfielder Leeroy Maguraushe who shot it from 18 yards out and ended up netting it for his first goal of the season.

The Bulldogs had their first scoring opportunity in the second half. UNCA’s Junior midfielder Joe Lacasto, had a shot on goal but was unable to capitalize thanks to a solid save from Jon Milligan. The Spartans took the 2-0 lead in the 63rd minute off a counterattack that came after a UNCA set piece. Maguraushe quickly got the ball and he smoothly directed the ball through the defense to UNCG forward Matt Mattis. Mattis took the ball and finessed it into the top corner of the goal.

UNCG really mixed up their defensive looks during this game. They played 25 men in this game; so many players got minutes. Milligan had five saves during this game and was not scored on at all. It was his second shutout game of the season.

The women went into William & Mary with an overall record of 2-5-1. After this game had concluded the Spartans snagged their 3rd win of the season in what was a hard fought 1-0 victory, as they posted their third shutout of the season.

The blue and gold went into the game strong on defense, as did the William & Mary Tribe. There was not any offensive showing by either team in the first half. The back line of the Spartans played well the entire game. Freshman goalkeeper, Aiyanah Tyler-Cooper, ended the match with six saves.

The lone goal of the game came in the 60th minute. The Tribe tried to clear the ball out of the goal, and it ended up barely reaching the dividing line between the goal box and their side of the field. Emily Jensen positioned the ball in the middle of the William and Mary box. Quiqui Hita got the ball and kicked it into lower right corner of the goal with the outside of her right foot for the Spartan goal.

Based on statistics, one would not think that we would have won the game. The Tribe had 19 shots on goal while the Blue and Gold had only five. The defense really had to buckle down in the second half of the match considering that William and Mary outshot UNCG 14-1 in that half. The difference is that the Blue and Gold capitalized on their second half opportunity and the Tribe did not. William & Mary had more set piece opportunities as well, getting five corner kicks compared to UNCG’s two.

It was a good weekend of winning for Spartan soccer. The men will be continuing their schedule on Sept. 20 in Buies Creek, North Carolina to battle Campbell. The next game will be a fun one to watch as it is against in-state opponent Appalachian State on Sept. 23 at 7:00 p.m. at the UNCG soccer stadium. SoCon play then kicks off the next week on Sept. 26 at ETSU.