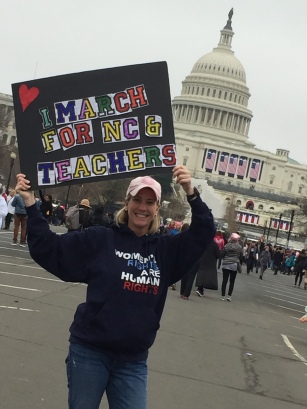 The candidate, Dr. Jennifer Mangrum, is a clinical Associate Professor in the UNCG’s School of Education. She will be campaigning in Rockingham County as an opponent to the incumbent Phil Berger.

“This all started because I feel like I’m an advocate for teachers,” said Mangrum. “There have been numerous policies over the past 10 years that have had negative impacts on schools, teachers and students.”

Mangrum started to consider running after the 2016 elections when she saw that Berger was running unopposed.

“You cannot have a democracy if you don’t have at least 2 sides represented,” said Mangrum.

Having been a lifelong registered Republican from a military family, Mangrum says she had become unhappy with the treatment of teachers and changed her identification to that of a Democrat on Jan. 3, 2017.

“I’m open. I was a Republican, I need to tell you that. I had a father who fought in World War 2, Vietnam and Korea, and when I registered to vote in the ‘80s, if you were military then the Republican Party was the party that you felt was going to take care of your family,” said Mangrum. “The party has changed so much since I registered. I’m also really embarrassed that leaders in the Republican Party represent us in the way they do but I was a voter who looked at the person.”

She decided to run a few weeks after changing her registration, asking herself “why not me?”

“In January, I thought about the fact that when I had gone to the polls in 2016, there was not a Democrat option for my district,” Mangrum said. “One way to get attention on teachers is to challenge [Berger] and see if he wants to have a conversation about some of these policies.”

Mangrum is a North Carolina native and comes from a family of educators. She taught elementary school for 14 years and now continues her work through UNCG. She is driven by a passion for education and even took this drive to the Women’s March in January 2017.

“My poster said ‘I’m marching for North Carolina teachers,’” said Mangrum . “I wasn’t running at that point, but 80 percent of elementary teachers are women. If we had someone who spoke for them, so many things could change.”

Mangrum’s platform is primarily based around her love of education, as well as healthcare and the workforce. She believes that these things are particularly important in more rural areas, such as Rockingham County.

Recently, Mangrum has been getting her name out across the state by writing Op-Eds on education from Wilmington to Asheville. This has introduced her to various people across North Carolina and has given her the chance to advocate on behalf of teachers in order to empower them.

“Obama said that politics is not a spectator sport, and that really resonated with me because it had been for me,” said Mangrum. “I was always informed, I knew who was running and what they were interested in, and I voted, but until I started doing what I’m doing now…I’m not a spectator anymore. I have met some amazing people and been like ‘where have these people been?’ but really it’s where have I been.”