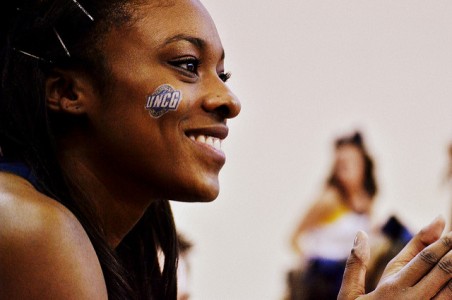 If you did not come out to Spartan Madness on Thursday, you missed out on a whole lot of school spirit.

Anticipated with much fanfare, Spartan Madness 2017 delivered and then some. Students were lined up outside Fleming Gym well over three hours before the doors were set to open, and for good reason. Packed to capacity, Fleming was rocking all night between the dunk contests, three-point shootouts, prize giveaways and a wild show by YFN Lucci. It was loud and it couldn’t have been a better way for the 2017-18 UNCG basketball season to get underway.

The crowd was indeed into it all night; the electricity in the air was nearly palpable. The dunk contest and appearance by Lucci were met to much applause, but the loudest cheer of the night came when a student won free tuition for next semester. Three randomly chosen Spartans competed against each other in a rather confusing challenge involving balloons, puzzle pieces and layups. The challenge got off to a slow start, as the audience did not exactly know what was going on, but as Sierra Moody collected her puzzle pieces, Fleming got louder. Jumping out to a huge lead, all she needed to do to secure the last pieces of the puzzle and win free tuition was make a layup. Well, it took her about ten tries, but she finally made it. When Moody finally did, all of Fleming erupted in a single, thunderous “YEAH!” Moody hurried back to the other side of the court to assemble the puzzle and ultimately earn free tuition.

Earlier, the women’s and men’s basketball teams were introduced and played an inter-squad scrimmage. After that, the teams—along with a few lucky fans—competed in a three point shootout and a dunk contest. Senior Garrett Collins won the three point shootout while Eric Hamilton, in front of a panel of judges including AD Kim Record and Chancellor Franklin Gilliam, came away victorious in the dunk contest. Hamilton, a junior transfer from Wichita State who twice won the dunk contest there, iced the contest with a stunning dunk over not one but three members of the band. It was a jaw-dropping display of athleticism; expect to see some highlight reel material whenever he’s on the court this season.

“[It was] an indescribable feeling when the basketball players started playing and I’m excited for the season to kickoff,” said freshman Damon Youmans. That wrapped up basketball for the night, and now it was time to party. YFN Lucci strutted out onto the court and into the seats—where he was swarmed by fans—as he performed his songs.

“I came out because I wanted to support my school and I was also interested in seeing [YFN Lucci] perform,” Lawrence said. “It was a big upgrade from last year.”

It was a perfect night in Fleming Gym. Many students came with friends to experience the rally, while many other Spartans there  did not know each other. When they would pass each other around campus, they would maybe nod, maybe smile, maybe avert their eyes. But not on that night. Spartan Madness was not just a pep rally for the basketball teams; it was a testament to our unity as one Spartan community.

There was electricity in the air, and a sense of comradery in Fleming. At one point, every single Spartan there locked arms and danced back and forth to the music, all 2500 of the students in attendance.

Both the women’s and men’s basketball teams starts their season on Nov. 10. The women will play host against Southern Wesleyan in Fleming, while the men’s team will open their campaign against the Virginia Cavaliers in Charlottesville.