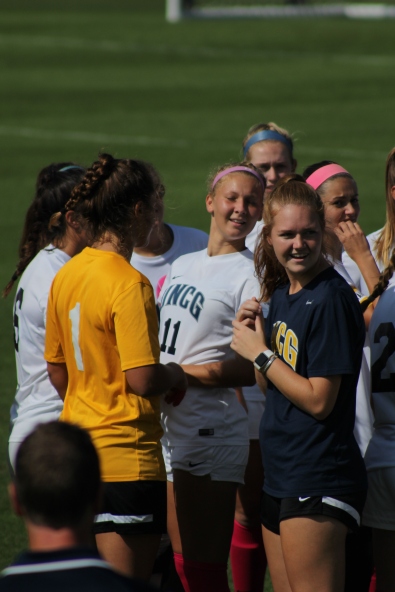 The UNCG women’s soccer team have returned back in the semi-finals. After last year’s disappointment at Furman, in which they lost in the quarterfinals, the women have finally gotten back to the semifinals. An exciting 2-0 shutout victory for the team, they will be traveling to play Samford on Friday in the semifinals. The women’s SoCon (Southern Conference) tournament will be held in Samford and will take place during this weekend, the semifinals on Nov. 3 and the finals on Nov. 5.

UNCG were definitely the aggressors for the 90 minutes of play, more than tripling the number of shots on goal than the Mocs (15-4), dominating corner kicks (8-1) and having a plus 3 advantage in terms of fouls (12-9). Despite 11 of their 15 shots on goal taking part in the first period, it was not until the final minutes of the period that Cienna Rideout’s ball found the back of the net. Another goal from Melanie Spensiero in the second period doubled the score and set the team up for a trip to the tournament, where they will meet the Samford Bulldogs.

Samford shares the top spot with Furman, both are always the top contenders to watch for in the SoCon. The match between Samford and the Spartans should be an interesting contest. During conference play, Samford bested UNCG 2-0. Although the outcome is not what the blue and gold wanted to see, the team right now is playing at a very high level. Sophomore forward Cienna Rideout has had an incredible last few games, scoring four goals. With Rideouts hot streak, the team hopes it continues on through the weekend and finish their attacks with much needed goals against a dangerous Bulldogs roster. The Spartans should look to rear in their tendency to get beat in the middle on the backline and fast starts. Both seem to be the greatest weakness of the Spartans, almost every team they have played have scouted them specifically on these weaknesses.

While Samford may seem like a Goliath to UNCG’s David, the Spartans have shown their drive and desire to survive and advance in the conference play. After having a rough weekend at Samford and Chattanooga during conference play, they knew they had to win out the rest of regular season. Knowing they were facing Mercer, another tough team in the conference, they played and won all games that they needed to land a third spot and a home game for the quarterfinals. And after their victory this past weekend, the women have earned their spot to compete for the SoCon championship. Though the fight will be rough, the G deserve to play this game.

The year away from the SoCon tournament gave the team something to focus on. Last season seemed off for UNCG, giving themselves a break from the stresses of traveling and playing high intensity games. The year off seems to have reshaped the lady team’s desire for the championship. The Spartans started the year off playing multi-year national champions Florida State University. They did an incredible job fighting off the Seminoles, even though the match resulted in a loss for the team. They also played another ACC (Atlantic coast conference) foe, Clemson. Clemson showed a rougher side of the women, but playing these games showed UNCG how strong they can be in the face of losing. Head coach Michael Coll believes that playing games like these show the girls how strong they can be in the face of adversity which is extremely important. This is an effort to show them that they can handle most anything, even if at the time it seems impossible.

The season began with the Spartans tabbed to finishing fourth in the SoCon. However, the past matches for the team illustrates not only that they can be more than a fourth or third place team, but that they can be a legitimate threat to the top teams of Furman and Samford. They will have this weekend to show how they fare to the Bulldogs, and potentially the Paladins or Western Carolina.