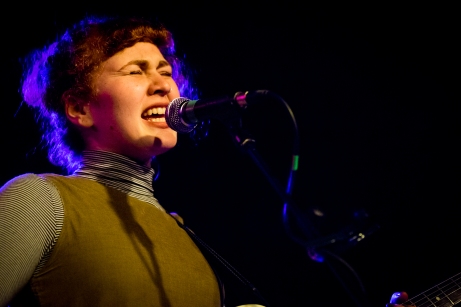 With doors opening at 7 p.m., concert goers began pouring in, eager to get out of the cold and dreary mist that took the evening hostage. The crowd was filled with a mix of UNCG students and locals, most of whom seemed to be dressed out of a mid-2000s indie flick.

Opening up the show was Lala Lala out of Chicago, Illinois. Consisting of Lillie West,

Karla Bernasconi and Abby Black, Lala Lala had more of a playful and unpolished style to their performance. With their first full album, “Sleepyhead,” released in October of 2016, Lala Lala channels an almost Neutral Milk Hotel-like vibe for most of the record. Each song in their set had a bit of clumsiness to it. Songs like “F*ck With Your Friends” and “Cool Party But Then We All Left,” were short and sleepy, displaying the band’s love for fuzzed out guitar and simple song structures.

Following Lala Lala, was Philadelphia’s own avant-garde rock project, Palm. The band is comprised of Eve Alpert and Kasra Kurt, both on guitar and vocals, with Gerasimos Livitsanos on bass. Hugo Stanley fills out the rest of the group on drums.

Palm blends elements of psych-rock with angular, mathy hooks, creating an ever-changing and unpredictable soundscape. “Walkie Talkie,” was a great example of this. It starts off with sporadic interjections of guitar, shifting into more fleshed out sections with lyrical melodies floating over lively guitar leads. “Shadow Expert,” the title track of the band’s June release, featured more of the same buoyant guitar passages, but with a lilting tempo and pop friendly chord progression.

At first, the crowd seemed to meet Palm with some reservation, being thrown off by the constant shifts in key, rhythm and tempo. Eventually, this confusion settled as the audience grew more attuned to Palm’s style and dancing ensued.

Headlining the night, was the Los Angeles, California-based band, Girlpool. Founded by guitarist Cleo Tucker and bassist Harmony Tividad, the group added touring members Joshua Sushman on synthesizer and saxophone, and Ross Chait on drums. Touring in support of their latest effort, “Powerplant,” Girlpool played a host of tracks off the record.

The song “123” kicked off their set. Tucker and Tividad’s soft crooning of “One two three will you list it off to me? / How you’re sorry you feel weird in a jubilation dream,” came off almost like a muffled sermon, both honest and captivating. The song continued to build into an almost anthemic chorus that had most of the crowd belting out the lyrics in unison. They moved onto the bass-driven track “Static Somewhere,” which featured a relaxed, march-like tempo and an almost whispering vocal delivery. “Soup” followed a similar vein, with heavy guitars eventually dominating the song.

For an encore, Tucker and Trividad performed some of their early works as a duet. “Cherry Picking,” was an upbeat folk number. Lyrically, it was rather flirtatious, “It will make me feel better / Knowing you watch me like the moon / Truth is that I am working / For myself and only me.” Their next number, “Chinatown,” was more of an intimate moment, with soft strumming and light bass work. The song showcased the duo’s intimate vocal harmonies.

Technically being a UNCG event, there were plenty of students in attendance. Senior Guy Smith had a rather flavorful take on the show.

“The performance tonight was a sonic casserole,” Smith said. “Lala Lala was the meat of the performance, it was a delicious sound. Palm was the cheese, a very rich and decadent experience. And with Girlpool [being] the pasta, holding the whole act together. It was a wonderful experience!”

Olivia Beach, another student, shared their appreciation for WUAG putting the show together.

“I am an extremely broke college student,” they said. “This is wonderful that this is free. I love Girlpool and all the other bands that came tonight, Lala and Palm were really good and thank God this was free, because otherwise I wouldn’t have had this experience. So thanks UNCG.”

The show pulled in local community members as well, like Becca Aubrey, who expressed their love for beer even though the event did not allow for the sale of alcohol.

“Anytime I see any lady or femme rockers I’m really excited,” Aubrey said. “I wish UNCG would have let me buy some PBR because I’m a community member and I paid to get into this awesome show, but thanks to WUAG for putting it on.”

If anything is true, WUAG definitely put on one of the most intense, softly-sung indie show that Greensboro has seen in a while.