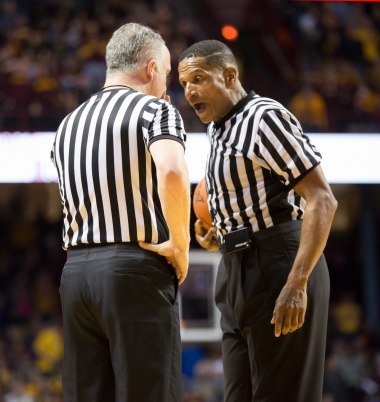 Referee Ted Valentine, also known as, “TV Teddy” is no stranger to controversy. Valentine has, once again, put himself in the crosshairs of his critics. Although his latest treatment of a senior player is an upset to thousands of fans, simply turning his back does not call for the amount of attention it is receiving.

The latest strife concerning Valentine is regarding the game between North Carolina and Florida State on Jan. 3, when senior Tar Heel Joel Berry II failed in his attempt to capture an outlet pass due to being held back by FSU’s Terance Mann. In his attempt to explain the occurrence to Valentine, Berry respectfully approached the veteran referee, yet instead of a listening ear Valentine turned his back and refused to listen.

This action has caused Valentine a colossal amount of negative backlash on social media. This criticism is not only from various sports critics, but also from thousands of fans. Although this is not the first time Valentine created a social wave due to his actions on the court, this occurrence has instilled the most frustration and impact upon the almost thirty-year referee.

Withdrawing a referee from a game, especially one as prestigious as Ted Valentine, for something so minuscule as upsetting fans for a supposed missed call, seems needless and inappropriate. Referees are strictly trained to enforce the proper reaction to any situation occurring on the court. Why should Valentine be punished for what he was trained to do? If anyone went outside the boundaries and specifications of their job and caved to the peer pressure of others, then no job would ever be properly completed.

Although he has been known for his confrontation on the court, this whole incident has been blown out of proportion. This controversial action has not only put Valentine in an extremely negative light, forcing him to be withdrawn as a referee for two games, but has also caused him to consider retirement.

Valentine has had a lengthy and prosperous almost 30-year career, refereeing for not only 28 NCAA tournaments, but also ten Final Fours and four national championship games to date. Being a referee is a vocation that requires resilience and tough skin, and one rarely completes a game without upsetting thousands of observers. Although his actions were deemed rude by multiple viewers, Valentine’s attempt to de-escalate the situation was a wise and common one.

Just imagine if a referee stopped the game for every upsetting situation due to calls that were, or were not, made. Games would become more of a nuisance than an enjoyment with the amount of additional time that would have to be dedicated to calls and pronouncements. Even Tar Heel coach Roy Williams seems to come to Valentine’s defense, stating, “I don’t think [Valentine’s] intention was there for it to look as bad as it did look.”

A veteran referee should not feel compelled to retire due to ignoring a player’s outcry and continuing on with the game, and fans should not take this meager incident and create a critical issue with it. In the sports world it’s not uncommon to see a bad call from a referee covered in the press; however, this was not case here. Valentine was taught, through conflict resolution classes, his actions that he executed during the game. He prevented conflict, diffused the situation, and properly carried on with the game, the precise duties that any referee would, and should, fulfill.

Even Jay Bilas, ESPN analyst, after criticizing Valentine’s poor move on the court, later stated that “Ted Valentine is a great official and he is a great guy.” In the timespan of a month or two this situation will be blown over and forgotten. More substantial news will occur and be announced, such as playoffs and championship games, sliding this paltry incident with TV Teddy behind the curtain and slowly disappearing from the forefront of news and minds.

Everybody makes mistakes, including referees, and we as fans should not let a single mistake cloud our judgement. Although Valentine could have chosen an alternate reaction to Berry’s approach, it is by no means cause for the loss of his job.  Let’s not take this frivolous incident and place a man’s prosperous career at stake.