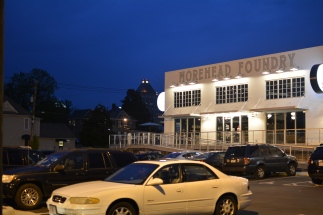 You can find The Morehead Foundry at 433 Spring Garden St, just past the colorfully painted overpass and train tracks at the edge of UNCG’s campus. The Morehead Foundry is owned by Fresh.Local.Good. Food Group, a Greensboro-based catering company who places an emphasis on locally sourced, eco-friendly foods with a Southern twist.

The Morehead Foundry is a dining and event multiplex that features three restaurants, a bakery, a speakeasy and a huge events space that can hold up to 300 people. The multiplex is also home to the offices of Fresh.Local.Good. Food Group and Carolina Event Rentals, is an event planning company that provides full service for any event.

Of the multiplex’s three restaurants, I decided to visit their most casual option: Revolution Burger. Revolution Burger upholds the Fresh.Local.Good. Food Group’s promise in utilizing fresh local ingredients, and the establishment in particular, also prides itself in its use of 100 percent organic ground beef. If you follow a plant-based diet like me, Revolution Burger does a great job in accommodating for us, offering seven veggie patty options.

The menu options themselves are fairly simple, providing nine styles of burger (ten if you count the build your own option), three salads, five sides and eleven different handmade milkshakes. They also have a huge list of alcoholic drinks on the back of the menu, so you will have plenty of choices if you would like to pair your burger with a locally brewed beer.

When entering the restaurant, the first thing you notice is that the location is rather large and open for a burger a joint, which seems to conflict with the “down home/Southern” aesthetic that is supposed to be a part of the Fresh.Local.Good. Food Group brand. While the other restaurants at the multiplex are nearly equal in size, they utilize the space in ways that make it feel cozy. There’s a decent walk from the door to the counter which can make first time visitors feel a bit intimidated, especially since there’s a wall that corrals customers into a tightly formed line.

The second thing that you notice, are the huge orange walls that feature the phrase: “Viva La Farmer,” and a raised fist. I believe that this is supposed to be a nod to Cesar Chavez, a Mexican-American labor leader and civil rights activist who famously founded the United Farm Workers of America, in 1962. This shade of orange was heavily used in UFW posters and advertisements, and often featured the phrase “¡Viva la Huelga!” or “Long Live the Strike!”  While this is commendable, the UFW focuses its operations in California and Texas, emphasizes helping exploited immigrant farmworkers. Shockingly enough, North Carolina doesn’t have a labor union for farmers so I found this to be a bit gimmicky and disingenuous to the consumer.

When it came to ordering, it was a fairly easy process, thanks to the aforementioned simplicity of the menu. I chose to indulge in the Ring of Fire burger with a Spicy Chickpea Patty without mushrooms; paired with a side of their Double Fried Sweet Potato Fries and Cheddar Mac & Cheese.

After waiting a fairly long time, the food finally arrived at my table and for the most part, was lukewarm.  What I had hoped for was a semi-spicy and flavorful burger given the menu item’s name and ingredients, but after a couple of bites, it failed to satisfy my expectations. The Chickpea Patty had little to no taste, and lacked any of the “spicy” elements that its name hinted at. In hindsight, I would suggest for my fellow plant-based dieters to play it safe, and go with a Black Bean patty.

The onion rings that were supposed to add a bit of crunch and zest to the burger were indistinguishable do to the overpowering flavor of Burger Revolutions in-house “Rev Sauce.”

In fact, the only “zest and spice” that came from the sandwich stemmed from my choice of adding Chow Chow, which lacked the true kick associated with the infamous Southern relish. That my meal lacked a kick was perhaps the most disheartening aspect of it, being that a huge part of the restaurant’s’ brand identity seems to heavily rely on North Carolinian and Southern aesthetics. Fortunately for me, there is Texas Pete hot sauce on every table, and so I was able to add some kick to my burger.

Despite my discontent with the burger, I did enjoy Burger Revolution’s side offerings. The Double Fried Sweet Potato Fries were my favorite, offering a perfect blend of sweet and savory flavors with every crispy bite. The flavor was very bold, and after the first bite, they almost seemed to melt in your mouth. The Mac and Cheese was also decadent, utilizing fresh cheddar, which melted thoroughly throughout macaroni noodles and had a very buttery consistency to it. Hints of black pepper enhanced the flavor of the mac and cheese, making it a solid side option.

With regard to cost, Burger Revolution is not the place to go if you plan on having an inexpensive specialty burger while enjoying a night out in GSO. Two meals and two beers cost around $40, which, when compared to many other local bar and burger spots, is very overpriced. Only one of the menu’s meal options cost less than $11, and additional toppings range anywhere from $.75 to $1.50 per item. Sides by themselves are $3 a pop, and the beer is overpriced, being that all the options are domestic beers and are mostly served in a bottle or can.

If you’re a fan of Greensboro’s other niche-organic-locally-sourced-gourmet concept restaurants, then you will definitely be a fan of Burger Revolution and the Morehead Foundry’s other restaurants. Conversely, if you are strapped for cash and don’t see the appeal of this niche market, then I would stick to your favorite pub or bar where you get more for what you pay.

To learn more about Revolution Burger go visit their official website at freshlocalgoodfoodgroup.com where you can view their menu options.