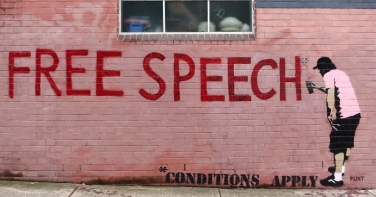 Universities are meant to be places where the free exchange of ideas is cherished and encouraged. They are places where young people go to escape the parents and friends whose opinions we’ve grown comfortable with, get strange new haircuts and develop new and perhaps idealistic views of the world.

It’s concerning that students, more than any other group, seem to have reached a point where we simply don’t want to hear things with which we disagree. We’ve replaced legitimate conversation with silence for fear of confrontation or hurting someone’s feelings.

This distaste for free expression and diverse thought leads to less active discourse and a greater likelihood of students overreacting to even non-controversial ideas. The backlash in 2015 at Erika Christakis over her email, for example, was wildly uncalled for. Christakis was a professor teaching early childhood education at Yale University where her husband Nicholas Christakis was a dean. In her email, Christakis was presenting an argument about whether college students should hand control over what we can wear on Halloween to a college administration or if we think we should be able to discuss among ourselves what is appropriate.

Christakis was simply reflecting on whether society would be more likely to improve if we just knew better instead of having to be told not to wear racist costumes. She in no way suggested that students should start wearing racist or offensive costumes, but the response was beyond dramatic and reaching well into the realm of parody.

Students protested in the Yale quad, screaming for the Christakis’s resignation. Nicholas Christakis’s attempts to have a conversation with these students about the email led to many of them shouting over him and telling him he had no right to speak.

According to a report in The Atlantic, one student went so far as to say “If that is what you think about being a master, you should step down! It is not about creating an intellectual space! It’s about creating a home here.”

Protesting is a wonderful tradition and an effective way for people to express opinions and take a stand. However, it’s often the case that college students are not just protesting what speakers are saying, but their very right to say it on campus.

The students who tried to get comedian and talk show host Bill Maher disinvited from Berkeley in 2014 where not just disavowing his words. The students were trying to avoid letting anyone at the university hear what he had to say because they thought his comments on religion were insensitive.

The same Brookings study shows that sixty-two percent of students believe that the First Amendment requires student groups hosting an event with a speaker to present an opposition speaker who gives the other side of the argument.

Not only does this show a blatant misunderstanding of the law, but it’s also absurd. While yes, it would be nice if everyone always presented all sides of an argument, there is no part of the Constitution which says they must and there shouldn’t be.

There’s no difference between requiring that groups present both sides of an argument at rallies or speeches and insisting that all people who watch MSNBC must also watch Fox News.

In the personalized media age, we’ve grown used to not having to hear things we don’t want to. There is no need for Donald Trump supporters to see anything on their phone which counters their beliefs in any way and the same is true for Bernie Sanders and Hillary Clinton supporters.

We see this as an advantage and it’s been a huge selling point for many products. There’s no doubt, however, that it has helped to lead us into a highly polarized reality and wildly decreased the likelihood that any of us will ever see or hear things that challenge our beliefs.

This makes it even more important that universities remain a place where everyone is free to speak their minds without being physically attacked or forced to be quiet.

The way to solve problems in our society is not, and has never been to shut people up when we don’t like what they’re saying. We should listen to people we disagree with. Perhaps every now and then through discourse, we can change their minds. Or who knows, they might even change ours. We can’t solve racism, sexism, homophobia and hate by writing rules and laws that stop people from talking about these things.

Like Loading...
‹ Textbook Terrors
Preview: Triad Stage Challenges How Far We’ve Come with “A Raisin in the Sun” ›