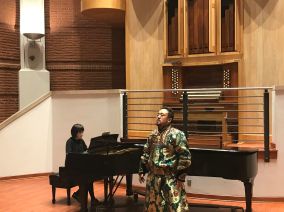 Visiting scholars and vocalists Qiaoyan Gao and Burigude shared a recital in the music building’s Organ Hall on Sunday.

The husband and wife duo teach at the Music College of the Inner Mongolia University for the Nationalities in Inner Mongolia, China, where they grew up and studied music. Qiaoyan Gao is a soprano, while Burigude is a tenor.

Along with their four-year-old daughter, they came to UNCG in January 2017 for a year-long residency. Since then, they’ve both been working with the School of Music’s vocal faculty to strengthen their singing skills and gain new professional experiences.

Their shared recital on Jan. 28 was a culmination of their year-long endeavor.

The format of the program was simple: Gao and Burigude would alternate taking the stage, where they would sing two solo pieces before switching. All were accompanied by Mengfei Xu, a piano performance doctoral student at UNCG.

The evening consisted of a great variety of music, from Chinese art songs to German songs to excerpts from Italian opera.

Gao opened the recital with her performance of a beautiful Chinese art song by Zi Huang, which most closely translates into “Spring Nostalgia.” The song, full of sadness and longing, showcased Gao’s beautiful voice well and made for the perfect opening to the recital.

Burigude’s first offering was also a beautiful song perfect for his tenor voice. “The Steppes of Mongolia” sets poetic Mongolian text to music. An ode to Burigude’s homeland, the song is all about the freshness and beauty of coming home. Burigude’s powerful voice soared over each note and melody, and he looked truly immersed in the music.

In all, Burigude sang four Mongolian songs, two of which were traditional folk songs. He was dressed accordingly in traditional Mongolian attire, shiny gold and green which only elevated the power of his performance.

The second half of the recital, marked by changes of clothes for both Gao and Burigude, focused on Western art songs from a multitude of time periods and composers.

Burigude, now in a blue suit, performed two passionate love songs by Alberto Donaudy. First, was “O del mio amato ben,” or “Oh, my most beloved,” an ode to the speaker’s true love. The song is emotional, going from thinking of his beloved with a heart full of hope to feeling lost and broken without her.

The other offering by Donaudy was “Spirate pur, spirate,” or “Breathe, still breathe,” a song simple in text and beautiful in music. Light and more playful, Burigude sings of the easy little breeze that comes with his love holding him in her heart.

One of Gao’s strongest performances of the night was Massenet’s “Ouvre les yeux bleux,” or “Open your blue eyes,” a beautiful French song. She sings the parts of both the man and the woman, two people who seek an adventure in the world.

The best example of Gao’s virtuosity came near the end, with Mozart’s “L’amero, saro constante,” or “I will love her, I will be faithful.” Long and complex, the song has many vocal runs that allowed Gao to showcase the extent of her talents.

The recital ended with the only duet of the night, the only time the two singers and partners shared the stage. It was an excerpt from Verdi’s “La traviata,” entitled “Parigi, o cara,” or “Paris, my dearest.” Enticing in its context within the opera, this was the perfect way to end the recital. Their voices blended together nicely, doing the famous duet absolute justice.

With an evening consisted nearly 20 contrasting songs that showcased Qiaoyan Gao and Burigude’s every ability. It also provided the audience with a chance to hear Chinese art songs and traditional Mongolian music, two things that are not terribly common in the school of music.

After a year of studying and practicing in residence at UNCG, Gao and Burigude performed a fantastic and truly beautiful recital.