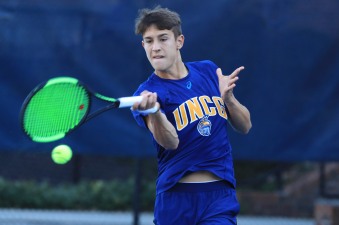 It is somewhat fortuitous that freshman tennis player Ollie Palmer even goes to UNCG. Hailing from the United Kingdom as one of the nation’s top-ranked players in his class, UNCG flew under Palmer’s radar until just a few days before his big trip to America to visit a handful of schools interested in signing him. Already scheduled to visit UNC Charlotte, South Carolina and Furman, Palmer tacked the Spartans onto his visit after a successful Skype call with UNCG men’s tennis head coach, Jeff Trivette. Ollie liked what he saw on his tour and committed to UNCG a few weeks later.

Now, Ollie’s freshman season is underway, and he’s settled into his new life in America. He’s a long way from home. However, he enjoys it in Greensboro and talks about the transition to the campus.

“As soon as I got here, I settled in well,” Palmer said. “Everyone is really nice and friendly here, the move-in staff, my professors and teachers. The tennis aspect is really good as well; I’m enjoying it and the level of training. With the school aspect, it’s perfectly balanced. There’s not too much of either.”

Though Palmer is loving his new life at UNCG, he did mention there’s one thing he misses from home.

“I miss having a cup of tea. Last semester I didn’t have a cup of tea for four months… I got home and had like, eight cups in one day.”

It’s worth noting that Palmer has, in fact, tried sweet tea, but it didn’t stack up to the tea he’s used to back in Gloucestershire, his home county in England.

As Ollie slowly becomes more and more acclimated to life overseas, he now plays an important role for the UNCG tennis team. Relying on powerful baseline strokes—including a devastating one-handed backhand—he’s found success early in his freshman season. After losing to UNC Charlotte 5-2 in the conference opener, he won his singles match and helped lead UNCG to a 7-0 team win over Presbyterian on Jan 28. That should be no surprise; Palmer has enjoyed a tremendous amateur career, capturing his first championship at the age of 10. According to Ollie’s official bio, he was ranked as high as No. 13 in Great Britain’s national rankings. Still, that success didn’t come easy for Palmer.

By the time he was a teenager and realized he was serious about tennis, he was putting in up to 16 hours a week into his training alone—and that didn’t include his class load and a 30 minute commute. Between all that, he was slogging through 16 hour days, every day. Those long days taught him independence and discipline, which has served him well since arriving at UNCG.

Simply put, Ollie Palmer is here to be excellent, and nothing less than excellence will cut it for him. Though UNCG cruised against Presbyterian, and while Palmer did win his match against Presbyterian’s Brandon Mills, it wasn’t enough for the talented freshman, who dropped a set on his way to the early season victory.

“I won my match in three sets, 6-3, 1-6, 6-3, which was a good match, but I just kind of went off a bit in the second set, which shouldn’t have happened. That’s something I’m trying to improve with my game, maintaining my focus,” Palmer said. “Obviously, I’d just lost the second set pretty comfortably and the third set I came out pretty good. I was the last match to finish, so all the guys were watching. That was a good feeling to have everyone support you on the court next to you.”

Palmer hopes that momentum will help propel him to reaching both the team’s goals and his personal goals.

“As a team, we want to win conference so badly. That’s where we’re looking towards… to go to the NCAA’s would be an amazing opportunity and experience. That’s what we’re focused on. We know what we want. Individually, I just want to keep improving my game. As long as I’m doing the right thing and improving, that’s [the primary goal.] I aim to get Freshman of the Year in the SoCon… so that’s, personally, what I’m trying to do.”

If Palmer keeps up the good start, he’ll be right in the mix for Freshman of the Year. UNCG Men’s Tennis is back in action vs Campbell on Feb 9. at the UNCG Tennis Courts.