How I Learned to Stop Worrying and Love the Jong 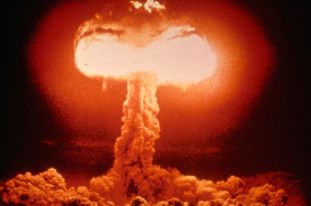 Thanks to globalization, we’ve come a long way as a people since the beginning of the 20th century. Countries have become so dependent on one another that war seems to be a thing of the past. Nuclear arsenals deter any threats of war out of fear of global annihilation so, for the most part, the only conflicts to exist are with that of terrorist cells.

With the threats of nuclear war from the North Korean dictator, Kim Jong Un, I had to wonder what impact a nuclear war could possibly have on the world. Surprisingly, there are quite a few unforeseen benefits to a thermonuclear holocaust. That’s why I now believe that a World War III could potentially be the best thing for mankind.

What a lot of bleeding heart liberals, such as myself, tend to complain about is a lack of focus on the arts in education. Kids are taught that it’s better to lead a practical life than to chase risky but fulfilling dreams such as being an artist, hence why there are so many business majors.

But a new global conflict could potentially revitalize interest in the arts. Some of the greatest writers of all time either served in a war, like Ernest Hemingway, Walt Whitman and JD Salinger, or grew up around it. Why is this so? Because all the death and destruction that existed caused them to develop mental illnesses which we all know generates the best art. So what better way to train children in the arts than to send them off to battle?

One of the big economic concerns in the near future is the takeover of automation in the service industry. With the rise of robotics we’re anticipating a massive displacement in the workforce that could potentially make the American worker practically worthless. But just like it did in World War II, global conflict leads to a higher demand for factory production.

Sure, automation might takeaway fast food jobs, but only a hardworking American can be trusted to construct all of the death bots that will be needed to rain down bullets on the families of our enemies. This would also create more demand for STEM-trained workers to develop new and exciting ways to vaporize any opposing forces.

One of the biggest benefits that would come out of World War III is a sudden rise in property values. Let’s say that after engaging in a longwinded Twitter fight, our president presses the big red button to launch a nuclear missile at Pyongyang, who immediately fire back at Seattle. Seattle then turns to rubble and all the people within it are vaporized in seconds.

Now that there is a significant lack of housing in the area, anyone who owns property in a nearby city has become a lot wealthier. It’s simple supply and demand: fewer houses means more demand for houses, making my house more valuable. Anyone who survives the initial bombs will practically become a king in the new radiated wasteland!

I think the most important thing that World War III could do for mankind, however, is one that’s been needed for a long time: population control. For centuries, humans were born and died pretty regularly thanks to disease and the occasional military skirmish. Having people die regularly is the only way to make sure there’s enough wealth and opportunity for the living. Now that modern medicine has made living to adulthood a cakewalk, the population of the world has been steadily rising.

The only real mortal threat to people in the first world is heart disease,which kills much too slowly. Car crashes, which will soon be unreliable due to automation via Elon Musk, and the occasional mass shooter, which only further illustrates the underlying bloodlust Americans need satisfied. Sending thousands of our youth off to a foreign country to die like cannon fodder is possibly one of the greatest ways to keep the population from rising too high.

After WWII, the male population was so scarce that workers were in high demand and got even higher wages, which led to one of the biggest economic growths in American history. Was the wonderful decade of the ‘50s built on the blood of dead teenagers in the ‘40s? Yes! And so can the 2020s if we fight hard enough!

Would a nuclear war result in the prompt deaths of billions of innocent civilians? Yes, and I realize I’m being optimistic with that estimate, but I really do believe in our potential as a nuclear power. If we want to build a society on ideals like kindness, understanding, tolerance or human decency, then sure, let’s find a peaceful solution to all global conflicts. But if we want to see a world with a stronger more reliable economy built on factory labor, then together we can create a greener, more glowing future.