Home › Features › Cristen Isreal: The Man Behind the Beats

Cristen Isreal: The Man Behind the Beats 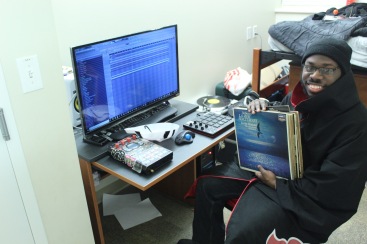 Meet Cristen Isreal, a UNCG Senior, Media Studies Major and talented hip hop producer. He is signed to the O-nei-ric Tapes record label, based in Sydney, Australia, and is focused on making his music heard by as many people as possible. In fact, many students at UNCG who don’t know Isreal personally have probably heard his beats because of the many times that he has set up his equipment on campus and blasted his creations.

The man behind the beat is as unique as his product.

Despite having a difficult upbringing, Isreal is is very open to sharing his music with the world, and uses his childhood as a source of musical inspiration that also feeds his drive to succeed. Isreal, he said, had a “rough childhood.” He grew up in Philadelphia, where his father “would work overtime just about everyday,” Isreal said, “to provide for [his] family.”

While many would be bitter in this circumstance, Isreal doesn’t ruminate on his struggles and feels that they helped him mature. “It helped me appreciate life more,” Isreal said, “a lot of people take life for granted the things that they have, growing up through my life experiences helped curve me into my likes.”

Those likes that he values so much are none other than music, anime and videogames. Isreal relayed that he was, “bullied for the things that [he] liked,” but he didn’t let society decide what was meant for him. An interesting thing about his beats is that he often incorporates elements from these interests into them through sampling.

One of Isreal’s sources of inspiration for embarking upon a musical career is surprising. This inspiration came from popular rapper Soulja Boy in an interview shortly after the success of his debut smash hit, “Crank Dat.” One of the only things that Isreal and Soulja boy have in common is age, and a 17-year-old Isreal listened online to Soulja Boy talking about how he created the song on his own with the popular audio software, “Fl Studio.”

Like a true optimist, Isreal took Soulja Boy’s self-made, overnight success story as a sign that he could do it too and bought the “Fl Studio” software for himself. While reminiscing on his thought process during this time, Isreal said, “Well if this guy can make beats and become an instant overnight hit so can I.” The fact that Soulja Boy is one of the indirect causes of Isreal’s musical journey is ironic because Isreal isn’t even “a fan of trap music” and believes that “radio music is trash.”

Isreal’s music isn’t what people will typically hear because of his unique production style. For example, he doesn’t just use his field recorder for sampling pre-recorded sound bites from anime and video games, he often also records himself making sounds with “things like pencils, leaves and textbooks to create [his] drum kits” after exercising some complicated mixing techniques.

Words don’t do it justice. These sounds are not something that is typical for radio play, and anyone in the Greensboro area who has a love for hip hop should give Isreal’s music a listen.

On Friday, March 16, Isreal donned an outfit derived from a very popular anime called “Naruto” and headlined a show at the A&K’s Cafe on Elm Street in Greensboro. He brought an energy to the crowd that set him apart from other performers. He even busted out a few dance moves, eliciting a crowd of laughs and smiles. Showing not only skills as a creator, but as a performer.